I’ve added a Step Template to my library called Add Bindings (a PowerShell step template to add bindings to an IIS site from definitions in a JSON string).

While debugging it, I found that the #require for my octopus-wrappers module was causing the script to fail, so I went to remove the #requires (assuming that the module name is different when Octopus loads it).

To my surprise I was unable to update the usage in the library - it thinks it isn’t in use: 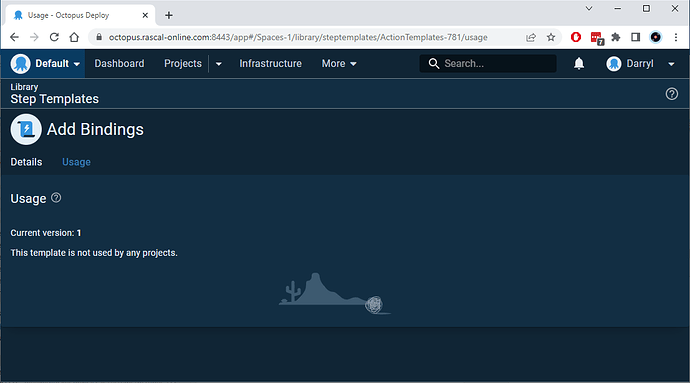 In the project (which I just put under version control today): 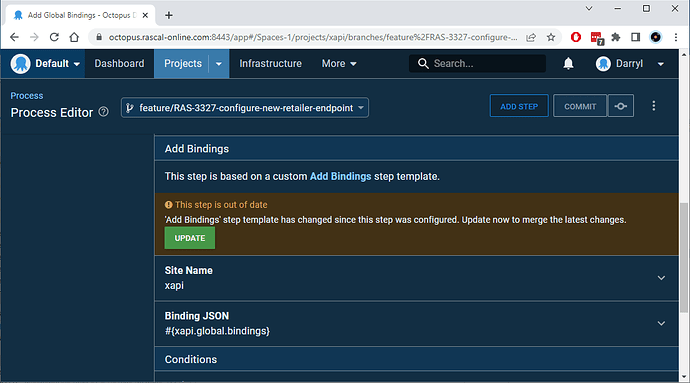 The UPDATE button does nothing.

Looking at the network traffic, the request to /api/Spaces-1/actiontemplates/ActionTemplates-781/actionsUpdate has a payload of an empty array:
[]

Looking at the OCL file in source control, the step template version is 0:

Is this a bug?

We are on Octopus server v2022.1 (Build 2232). I’ll try updating to the latest one, but didn’t see any issues in the change logs that looked like this problem.

Maybe posting it here could help somebody else.

The Step Template usage screen still says it isn’t in use in any projects though (it is only used in this single version controlled project).

Thanks for reaching out and for letting people know what resolved it for you.

I’ve added your ticket as an affected user. If you follow that, when it is resolved, a bot will update the issue with the versions the fix will be in.