The word 'webdav' is marked as sensitive in the tasklog

For some reason, the word ‘webdav’ is marked as a sensitive word in the tasklog.

In the the screenshot, you’ll see a partial capture of a task log, with asterisks.

picture11230×253 42 KB
The asterisks contain the word webdav, but why is it marked sensitive?

In the other screenshot, you can clearly see that the powershell command is written as webdavPassword and in the log it is shown as ********Password

An addition to the above;

What i see is that some projects contains these asterisk as well, on places that aren’t sensitive. For instance as part of an URL, where a word in the URL is marked sensitive.
But on another project the above isn’t the case.

It almost looks random. Like some sort of algorithm is trying to detect sensitive data and marking them, but not doing an awesome job at that

e.g. I created a sensitive variable with a value of “package” and then ran a `write-host “Testing the word package” and it becomes censored. 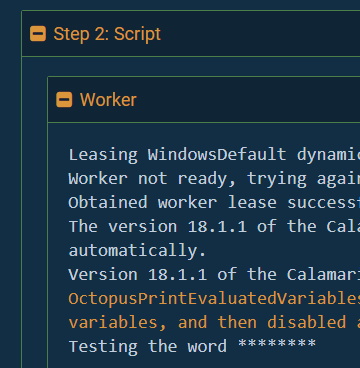 This behaviour is by design as it allows us to protect against accidental leaking of sensitive variables within logs without introducing the additional overhead of additional logic to check whether the log output is actually a sensitive value or merely a word that matches the sensitive value.

This was probably the case since the password contained the word as a part of the whole password.

Thanks for the clarification.