I recently added a step to my deployment process to execute some AWS CLI commands.
The issue I’m having is that it takes an extremely long time for it to start executing. Once the process step starts executing the actual powershell/aws cli commands it takes a matter of seconds but it spends about 40 seconds just waiting around before starting to execute. This is what the log looks like:

As the log show there is no log output between 13:38:40 and 13:39:24. Please help me investigate this odd behavior. If you need any more information don’t hesitate to ask.

Sorry to hear that we’re having these issues - we did make some improvements in this area in version 2019.5.12 to resolve issues with these periods of idle waiting. I’d like to suggest upgrading to a version of Octopus at or greater than 2019.5.12, and see if this is resolved.

Please feel free to reach out if you have any further questions, or this matter isn’t resolved with the upgrade. Happy to dig into this with you further to try and get to the bottom of it!

Thanks for the quick support. I will try updating Octopus to the latest version and get back to you with the results.

I’ve updated to Octopus Deploy 2019.6.7 and just tried to do a deploy which resulted in pretty much the same execution time. It waited around for 41s before starting to execute the PS code.

Thanks for getting back to me, @Wildpipe!

I’ll dig into this further today with our engineers and try to figure out what’s happening at this step that could be causing a slowdown for you. I’ll be in touch as soon as I have something for you.

The engineers and I were discussing this today, and we’re not sure where the delay is coming from inside Octopus, and wondered if perhaps your powershell profile may be (at least) part of the issue. I wonder if you could try disabling the use of the local PS profile to see if that reduces the wait time here.

To do this, simply create a project variable named Octopus.Action.PowerShell.ExecuteWithoutProfile with a value of true, create a new release, and deploy.

Please let me know how you go with this, and if you have any further questions.

As you suggested I’ve added the project variable Octopus.Action.PowerShell.ExecuteWithoutProfile to my Project and set it to true. Just created a new release and deployed it which resulted in a 40s wait just as before.

I’m helping Justin investigate this slowness you are experiencing.

I’ve tried to replicate the issue locally but I’ve been unable to see the same delay that you’re seeing.

I’ve also looked at our bootstrap script to see if anything in there would be causing the slowness, but none of the setup we do before invoking the script is causing this delay so it’s the invocation/running of the script that is the source of slowness.

Would you be able to share the script that is being executed for us to have a look at? If it contains sensitive information, you can email it to us at support@octopus.com referencing this support ticket.

Can you run an AWS CLI script that just does something basic (I just listed the contents of an S3 bucket) and see if that also has the 40 second gap before the script starts running.

If you have antivirus running on your Octopus server, could you disable it and try to run the script again and see if the delay persists.

Thanks for helping us figure this out.

Running a deploy with this process results in the exact same 40s wait time before executing.
I also performed a deploy with the antivirus turned off which made no difference, still a 40s wait before script execution.

The process is configured to use the AWS service role for the EC2 instance and use eu-west-1 as it’s region. Is it possible it takes ~40s to assume this role?

It is quite possible that getting the credentials when using the AWS service role for the EC2 instance option is what’s causing the delay.

I don’t have an EC2 instance readily available right now, but you can do the same thing we do in code to get the credentials when using that option to see how long it takes. So if you logon to your EC2 instance and open a browser and then do the following:

This should hopefully tell us if it is in fact this that is causing the 40s delay.

If this is still not explaining why there’s a 40 second delay, could you please provide the following information:

I look forward to hearing how you go.

Accessing the role from the ec2 instance is very quick:

I also ran the same command as the SYSTEM user (had to supply -usebasicparsing to get it to execute):

The Octopus instance type is a t3a.medium. 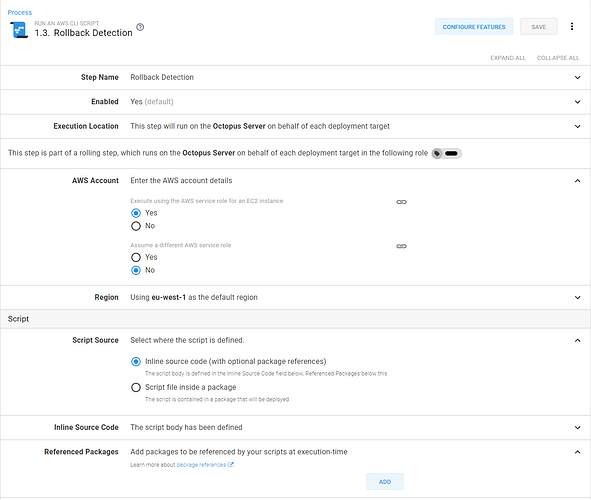 I’ll get an EC2 instance spun up and do some further testing, I’ll get back to you as soon as I can.

I’ve been doing some more investigation into this, I spun up an EC2 instance and configured my process like yours but I am still unable to replicate the 40 second (not even closely) delay on any of my tests…they take max a couple of seconds to run.

One option we have is to use PowerShell debugging to step through the script that is run, this could potentially tell us more about what the delay is.

I tried activating Powershell debugging for this process and after a couple of deploys got the hang of it.
It takes about 15-20s before I am even able to attach to the debug-runspace - once connected I can let the script run which finishes in a matter of seconds. Seems like it’s taking a really long time just getting the environment ready to run any sort of code. If you’d like to take a closer look at the issue we can setup a support call.

That 15-20s delay feels like it’s more down to setting up the debug environment rather than kicking off the script.

If you run just a normal PowerShell script step on the Octopus server, does it also experience the 40s delay in executing the script?

Could you try and disable the Check for publisher’s certificate revocation option as per the instructions here, my hopes of this rectifying the delay is low but worth a try at least.

Running a normal PowerShell script step does not encounter a 40s delay in executing the script. Running a regular PS script step of several hundred lines of code takes merely 5-10s with no delay time at all.

I disabled Check for publisher’s certificate revocation and ran the deploy again but unfortunately no change - still a 40s delay.

Thinking it’s an issue with ssl-certificates or the like got me thinking there might be an issue with firewall openings. The security group attached to our Octopus instance only allows outbound https(port 443) traffic towards the internet. I added a temporary opening for http(port 80), ran the deploy again, and voila the 40s delay is gone

Is port 80 outgoing traffic required for this to work without delay or is there some configuration we can do to eliminate this need?

To try and narrow down where the delay is being triggered we have a build of Calamari that has some additional logging. The following steps will deploy the custom build

The deployment will then display a number of new log entries, and hopefully the gap between these entries will show us where the code is being delayed.

If you could then paste in the log messages here we should be able to narrow down the cause.

Unfortunately we have only got one Octopus Deploy system running which is the one we use for Production. I would like to keep the production system on the LTS version so that means I would have to spend some time setting up a test system. If you could setup a test system and run the custom build on your system it would be much appreciated. If not - it will take some time before I can get back to you with the results of the test.

Unfortunately, I’m unable to replicate the delay on an EC2 instance myself, however the supplied DLL can be used with the Octopus LTS version for a single test. The LTS version uses Calamari 6.0.0, so to run the tests you would: