I have one project whos life cycle was set up differently to by pass lower environments as this project is only released to one. The issue is there is three seperate tenants and some times we only want to deploy to a single tenant.
However when I save the release it immediately deploys to all three tenants. I don’t get a chance to select the deploy to button. Where do I need to change this at?

It’s possible this is a simple one, although it’s entirely possible it’s not

I think this might be due to the first phase in the project’s lifecycle being set to deploy automatically, which is why as soon as you create the release, the first phase qualifies and deploys.

This is explained in a bit more detail in our docs here:

Lifecycles allow you to control the way releases are promoted between environments.

To confirm, in the project that you’re trying to create a release for, take a look at the deployment process, and make a note of the lifecycle:

Then, pop over to the Lifecycles section in the Octopus Web Portal (Library ->> Lifecycles) and check the lifecycle in question.

If it looks like this, with a lightning bolt

next to the Environment(s) in question, that’s probably the cause: 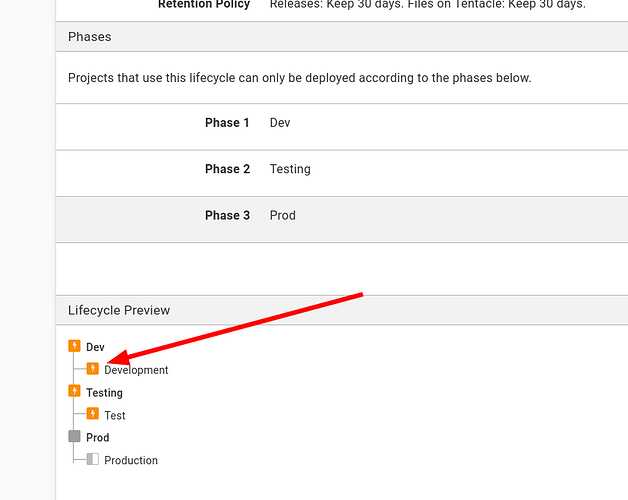 To change this behavior, you just need to alter the first phase and remove and re-add the environment and make sure the selection chosen is Users will need to manually queue the deployment to this environment.: 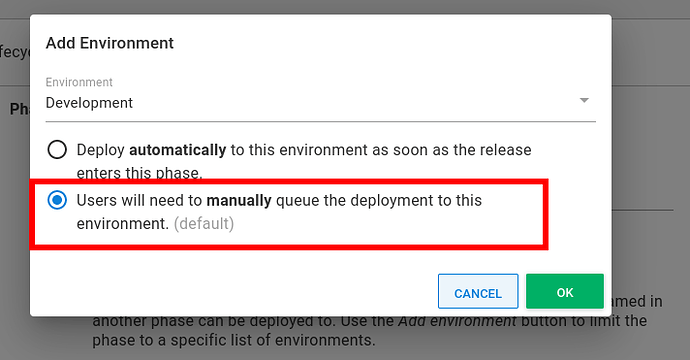 One thing to consider is that if the project in question is using the Default Lifecycle then by changing the phase on this lifecycle, it could affect multiple projects. If that’s not something you want to do, I’d recommend creating a specific lifecycle for the project and assigning the lifecycle to the project in the project’s settings.

Hope that helps, but let me know if you have any further questions!

I think that does explain it. We are waiting for LifeCycleEdit permissions in order to verify as that was missed in the migration to our team. The life Cycle in question only has one phase being production. Is there a way to verify that setting without removing the environment and re adding it?

Or actually I guess the presence of that lighting bolt confirms it.

Yes, if you see the lightning bolt

next to the environment/phase, it means that phase is automatically deployed when a release enters it, which for a lifecycle with only one phase, will be immediately when the release is created.