Not found error for docker manifest on release page

I’m seeing an error on the Project/Releases/Release page (i.e., https:///app#/Spaces-1/projects//deployments/releases/) in the Packages section. The project deploys docker containers to an Azure VM. The error is:

Failed to retrieve notes: One or more errors occurred. (Request to https://<acrname>.azurecr.io/v2/<tag>/manifests/<version> failed with NotFound:Not Found.)

The registry is set up in External Feeds successfully. The Azure AD user has AcrPull permissions. The project deploys successfully otherwise. I have Build Information configured (from TeamCity) and that appears to work as expected.

I tried granting Reader permission also but that didn’t seem to affect the errors. Any suggestions for what the issue might be?

Thanks for getting in touch! This behavior you’re describing certainly doesn’t seem correct, though unfortunately I’m not sure what could be causing this at this stage. Could you let me know which version of Octopus you’re running, and could you also check the console log in your browser’s dev tools and let me know if that’s reporting any errors? This information should help narrow down the search.

I look forward to hearing back and getting to the bottom of this one.

Nothing in the console that looks like errors. Checked both Chrome & Firefox. An example request for this URL: https:///api/Spaces-1/packages/notes?packageIds=%3A%3A shows the response below.

If I open the manifest URL directly in the browser, I get an Unauthorized HTTP error, which I would expect with the raw GET. Browsing via the Azure portal, I do see a manifest. It looks like:

I did set up the release note template yesterday based on the instructions on the website. So far, the release notes & deployment notes are always blank. I’ve been redeploying the same build, so I assumed that might be part of it. I also noticed I’m not getting work items in the Build Info, but I do get commit links (probably expected because the commits showing up don’t have work items in the comments). Thought I would mention it in case it points to anything. 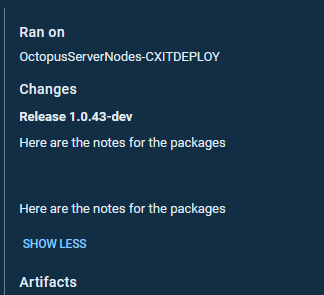 Thanks for following up! This one certainly seems mysterious, and one I can’t see any related reports of in any recent version from what I can tell. I am curious though about the version of the Octo CLI you might be using on the TeamCity side, as I did see an issue with version 7.3.3 that might be related. Might be a shot in the dark but might be good to confirm one way or another, but if it is the case you’re running that version, could you give upgrading a try?

We’re using v5.5 of the TeamCity Octopus plug in, which looks like the current version. I don’t think we’ve installed the octo CLI independently onto the TeamCity server. Do we need to?

Thanks for keeping in touch! v5.5 of the plugin should have the latest CLI included. This detail will be included in the build log, so it might be worth confirming in there just in case.

Thanks for following up! So it looks like that is an older version of the CLI, latest being 7.3.7 (which you can download here). Are you able to give that a try and let me know if that clears this up?

I don’t see any way to configure TC or the Octopus plug in to use the non-bundled version of the octopus CLI. Could you suggest how to do that?

So I downloaded the v5.5 from https://plugins.jetbrains.com/plugin/9038-octopus-deploy-integration and decompressed the ZIPs/JARs. The EXE/DLL version is showing 6.17.0, not 7.3.7. This was the path: Octopus.TeamCity(zip)\agent\Octopus.TeamCity\Octopus.TeamCity(zip)\lib\Octopus.TeamCity(jar)\resources\3\0 and there’s an Octo.exe there and then in OctopusTools.portable.zip, there’s Octo.dll. Obviously, I don’t know if this is all accurate for what is being used under the hood, but it does match the version reported in the build log. 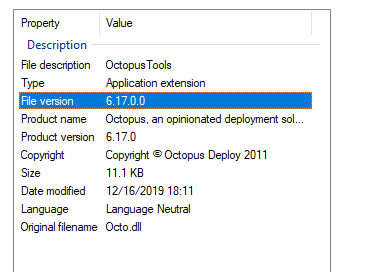 Thanks for following up! On second look, I wonder if you’re hitting a previous bug regarding an accidental change in the Release Notes argument on the create-release command in the CLI, as the symptoms of a previous report look similar, and would be easier/quicker to test. This was specifically a mistake made changing the --ReleaseNotesFile argument to releaseNoteFile (missing the s). Are you passing this argument, and if so does removing the s in it fix this issue for you?

If that doesn’t apply or doesn’t fix it, would you be willing to send through your build log for us to check out? That’ll help us accurately narrow this down, and you can mark this thread as private or email support@octopus.com and I can pick it up there.