We have few global variables and project variables.

During one of our current release, I find out that our SME created a new release and prolly did not click on the update variable button. and the release is not updated with the global variable. 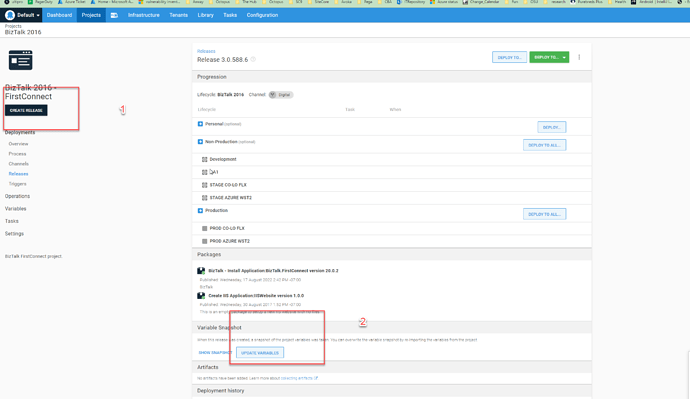 I see in runbooks you can create a new snapshot of variables but for a release, some user will take it for granted that the new release will contain the new variables but in our case it doesn’t.

I also find out that even if we click on that button 2 in the screenshot, if i created a new release, that update variable will stay stay in the screen even without any variable changes.

So it gets a little confusing. Please confirm thank you.

Great to hear from you again, thanks for reaching out!

When creating a new release, the latest variables should be gathered into a snapshot which is then associated with that release.

You can check the variable snapshot’s values under Show Snapshot, while the Update Variables (which is always available) will check the variables and get the release to use a new snapshot with the latest values if there are any changes.

If you’re not experiencing that behaviour then I’d be happy to take a further look into what’s going on, could you please send through some screenshots and a HAR file of the behaviour you are seeing to this secure upload link? If you add a new variable and then create a new release, are you not able to see that variable in a newly created release, or is it only not using the latest value for specific variables?

Our documentation here covers Release Variable Snapshots but feel free to reach out if you would like some further clarification at all!

No problem at all, unfortunately that does make it a little harder to see exactly what’s going on but we should still be able to find the update event in the Audit logs!

If you navigate to Configuration → Audit and use an advanced filter (e.g. Event Category of Document Modified) then you should be able to see when a Project or Releases variables were modified and figure out what occurred when this release was deployed: 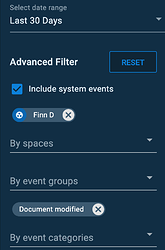 I would also determining if the effected Deployment used an existing Release that didn’t have it’s Variables updated or it was using a newly created release.

Feel free to let me know if you have any questions or run into any issues at all!

HI Finnian thank you for the reply.

What is the difference of variable changes and variable snapshot changes? 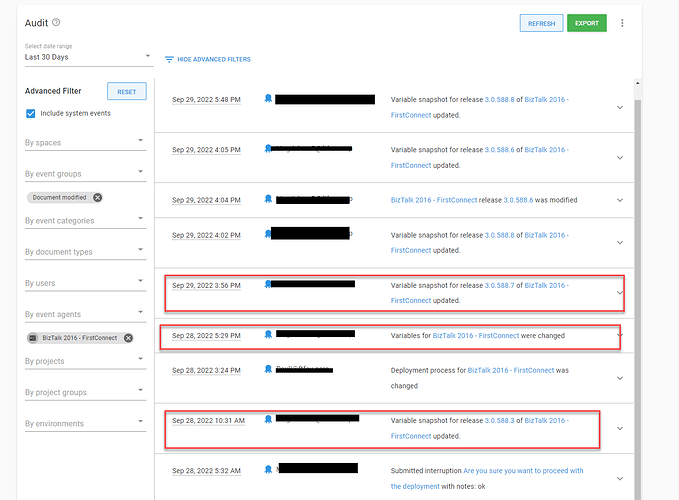 I’m just stepping in for Finnian since he’s currently offline, but I think I can help answer your question.

The ‘Variables for <project> were changed’ record is indicating the variables under the project were modified. These are under under Project > <Your Project> > Variables.

The ‘Variable snapshot for release <release> of <project> were changed’ refers to the variables being updated in a release snapshot, and you can see these under Project > <Your Project> > Releases > <Release>:

The confirmation window has a great explanation on variable snapshots if you haven’t seen it yet, which might help explain it better than I can:

I hope that’s helpful, but let me know if you have further questions!

Hi Patrick thats a good call out. I did notice that in each release i created i see this button but not necessarily meaning there are update. because i created multiple release, with same variables. but each time I see this update variable button each time. Given the fact that each release, the variable will be updated.

I was under the impression, that if there is no update, that it should not be showing up there.

Like in the runbook we use, i see they have a floating publish a new snapshot if variable changed, or they wont be there at all.

Yep, that’s correct. You’ll see the Update Variables button on the Release page regardless of if there have been changes made to the variables since that release was created.

When you create a new release it will incorporate any changes you’ve made to the variables. The ‘Update Variables’ on a release is only needed if you wish to make variable changes to a past release.

With Runbooks, you have the option to run the Published version of the Runbook, or the current draft. For a Published Runbook, you’re correct that you’d have to click ‘Publish’ to get the variables updated in the most recent snapshot of the Runbook.

Running the ‘Current draft’ of a Runbook will use the variables in their current state:

Hopefully I’ve answered all of your questions, but let me know if there’s anything else!