How can I leverage Octopus Deploy with the GitFlow branching strategy?

GitFlow is a popular git branching strategy. The TL;DR; of the that linked to document (grossly oversimplified) is:

Imagine you had 5 environments. At any given point you could expect to see the following versions:

Some use cases to think about:

What are some recommendations for using Octopus Deploy with GitFlow?

The recommended approach is to leverage lifecycles and channels.

To start, we will need 5 environments listed in the question.

With those environments, we will create four lifecycles: 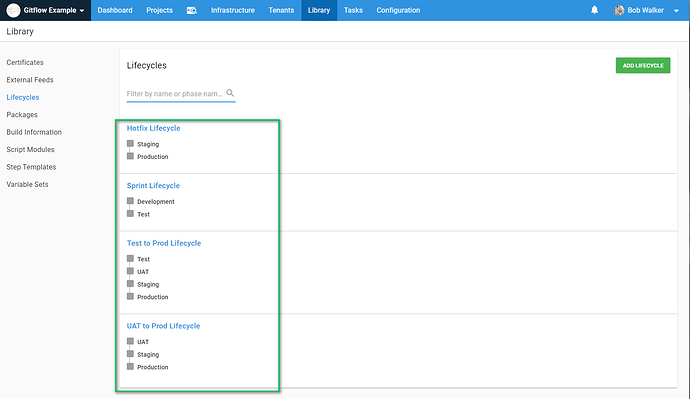 Before proceeding, let’s pause to discuss the use cases for each lifecycle

Now that we have our lifecycles, we will need to create channels for each project following this branching strategy. 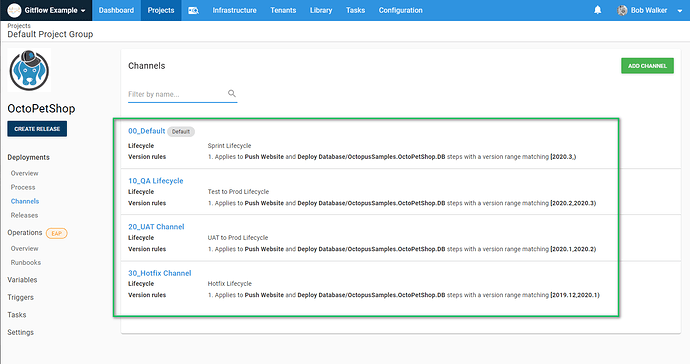 The version rules aren’t required. They are there to help prevent code from being deployed via the wrong channel. Having them does add a bit of complexity as you will have to update the version rules after each release branch is created.

The question now becomes, how does a build server know which channel select when creating the release? That will depend entirely on your business rules. What I would recommend is using the Octopus API to check the last release number for each environment. Here is an example on how to do that. Once you know the release number per environment you can infer which channel you need to deploy to.

If you would like to see this sample in action, please go to: https://samples.octopus.app/app#/Spaces-25 and sign in as a guest.

Hi @Bob_Walker, great write up thanks!

We use the GitFlow branching strategy and I’ve been thinking about simplifying our release projects with channels, however I am worried that for a hotfix there exists a possibly for the release process to have been changed, for changes made in development, that would break a hotfix e.g. command line arguments for a process get completely changed.

Is this an issue and are there any suggestions on how to best handle it? It’s not the kind of scenario that would happen often, but when trying to release a hotfix I wouldn’t want it to be held up while having to work back through some release process changes.

An approach I came up with to avoid the issue would be to first clone any steps that need editing and then have the edited step only run for the development environment and the unedited step run for the staging and production environments.

Hmmmm, that is an interesting question. It does come up from time to time. If it is just new steps, I’d say scope the steps to run on the specific channels. For example, you add a new step for what is in dev, then scope that step to the dev channel. When it is time to promote then scope that step to the next channel and so on. If you’re not making a lot of changes, hopefully that isn’t a terrible experience.

As I type this, this isn’t a great experience, it is something I hope we can solve in upcoming releases.