The way the trigger works is that it will attempt to promote the last successful release within the Source environment to the Destination environment.

With that in mind, I’m wondering whether your newer releases have been manually deployed to the Source environment yet?

If they have been deployed and are still not being used by the trigger would you be able to check if their deployment completed with any warnings? That can prevent a deployment from being seen as “successful” by the trigger.

Lastly, if you head to Configuration > Diagnostics at the top there should be a Scheduled Trigger Logs button. This log may provide additional information as to why that specific release is being used rather than the newer ones.

Feel free to attach or PM me the log file if you would like us to review it.

We create automaticly new releases from TeamCity. We normally don’t deploy them manually to the Test environment. We want to deploy ones a day the latest created release to all test environments regardless of being deployed or not.

In that case there are two ways to achieve this. 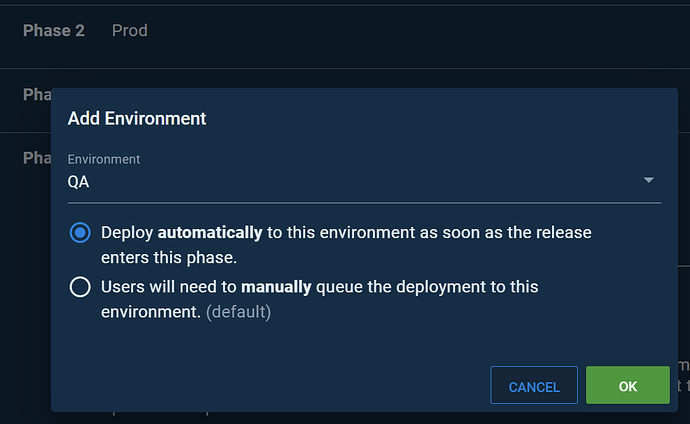 The other way of doing this would be to change the Trigger Action to Deploy new release. This will then create a new release using the latest package and deploy it to the Test environment. If you do this you may want to amend your Teamcity process so that it doesn’t create releases anymore as those releases wouldn’t get deployed to Test.
e.g.