To help figure out where this is failing, would you be able to provide some additional information for me?

Firstly, can you provide the full release version number of one of the releases that this is affecting? Does it include any pre-release tags? e.g. 1.0.1-beta

Second, if you view the deployments for the test environment within the UI, do you see full deployment notes on the right hand side? Or does it match what is appearing in the email?
e.g. 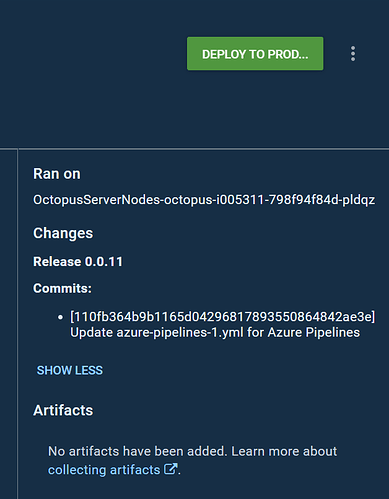 Thanks for your quick reply!
I’ve used pre-release tag as ‘bau’ I dont have different version number from one envt to another. I am alwasy promoting the last release to the higher envt. The UI also shows the same as it is in the email.

OK, I had a feeling that may be the case.
Deployment notes are handled differently for pre-release versions. Octopus will only gather up multiple release notes into a deployment note for full version releases. There is more detail on this here: https://octopus.com/docs/releases/deployment-notes#Versioning

I think that is the reason. I am not following that kind of versioning rules. Is there any other means to consolidate a release notes?

The only other way would be to do this manually using a script and the API. You could retrieve a list of releases created on the current day, then extract the release notes from each one. Then, each set of notes could be added to output variables and used within your email step.
This isn’t something that I’ve done before so I don’t have any examples available for this though.

We do have a repository of example API scripts available that may help you get started if you decide to go this route: https://github.com/OctopusDeploy/OctopusDeploy-Api