Details” and this can be a different machine. We using remoting as the Management Protocol.

It works fine and gets deployed.

However on reboot of the Red hat linux box, jboss seems to be unresponsive to the new application that was deployed in the WAR file.

I have an idea what is going on – on restarting jboss, there’s a warning it cannot find the uploaded helloworld.war file:

I think it’s because we remote the file in from the web services box, it doesn’t save the transmitted war file. so on restart or reboot, it can’t find the war file. Has anyone experienced this?

Would you be able to provide any assistance? 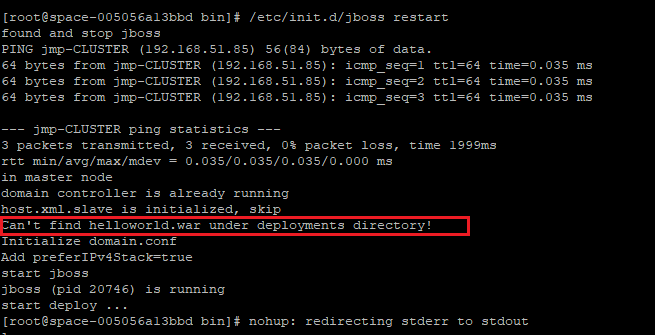 Hi Jean-Marc, thanks for reaching out.

In the screenshot you have provided the error message Can’t find helloworld.war under deployments directory! appears to be a custom message generated by a manual check for a file that I assume was written into the init script used to start EAP. Is this correct?

If this is true then I suspect there has been some confusion around how EAP deploys WAR files.

You can copy the WAR file directly to the deployments directory, in which case the deployment scanner will recognise the new file and deploy it.

Alternatively you can deploy the WAR file via the management API (used by the Octopus steps) which does not result in anything being saved in the deployments directory. EAP will save the file in its own custom directory structure under /standalone/data/content/. You can get more information on this content repository at https://docs.jboss.org/author/display/WFLY10/Application+deployment#Applicationdeployment-ContentRepository.

There are 2 ways to solve this error: