From this page we understand a serious limitation of Octopus is that “deployments of the same project to the same environment (and, if applicable, the same tenant) are not able to be run in parallel”

This is a perfectly normal scenario for us, where we have hundreds of different SSRS reports and one automatic deploy project “Deploy SSRS report”, with a manual intervention step Proceed/Abort at the DTAP Acceptance environment. Today we are releasing new versions of some thirty reports, and by this limitation they need to be handled one by one. We have other projects that fit the same scenario such as “Deploy files” and “Deploy database script”.

When can we expect Octopus to support concurrent deployment of multiple releases of the same project to the same environment?
Is it on the roadmap?

Hopefully the answer is not that we should create 245 separate projects, one for each report…

Replying to my own post, to clarify a thing.

The latter has so far always been possible in Octopus, fitting well with the described scenarios, but appears to have been broken by a recent change in Octopus 2019.5.8.

I believe I understand your scenario. And I can see why this change has caused a problem for you.

For a little context, we had a number of customers for which the previous behavior of allowing a concurrent deployment to start while another was awaiting manual intervention was causing problems.

And given the primary use of Octopus is deploying applications, we agreed and implemented the change.
We hoped the change wouldn’t negatively impact anyone, but unfortunately it evidently has.

I’m raising a discussion with the team to see what we can do to improve this for you.
It’s interesting, your scenario isn’t deploying an application, but rather running a job.

This doesn’t help you right now, but we are working on a feature called Operations Processes which will be specifically designed for running these types of tasks.

Thanks for your reply.
I’m not sure where you get the idea that in this case we’re not deploying an application but rather running a job? What is your definition of an ‘application’ and that of a ‘job’?

We have several IIS applications and their Octopus deployment projects. Of each application we may have more than one version simultaneously on each environment. Part of these applications, and that we have separated out, is reporting, which offers our users a myriad (hundreds) of reports over their data. Each report is developed, versioned, deployed and tested independently from the IIS applications and consists of an RDL for SSRS plus one or more supporting database scripts. That doesn’t sound like a ‘job’ to me.

Our deployment project for SSRS reports is currently as follows: 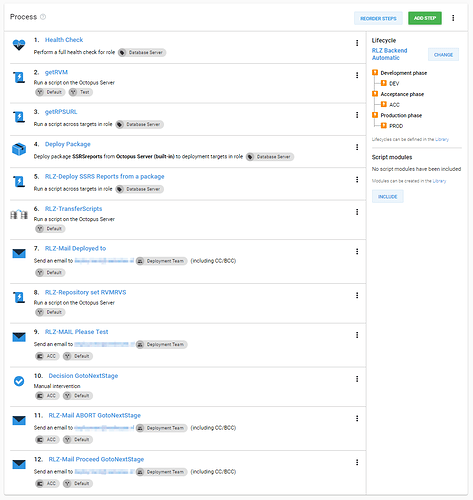 And even if we were deploying an ‘application’ (IIS or otherwise), why should we be limited to only one concurrent deployment on each environment?

I do not understand why you think this is running a job and not deploying an application.

The only special thing we do is we use the major version as a report numbers. This is the mean reason why we are deploying a lot of different versions of this project at the same time.

But this is not the only project impacted by your recent change of to block multiple deployments to 1 environment using manual intervention.

I can understand that for some of your customers blocking deployment on a manual intervention would be beneficial, but for us this change is really disastrous, potentially forcing us to rethink and rebuild our deployment processing.

We are a paying customer for quite a while now. We were really taken by unpleasant surprise by this sudden and for our organization breaking-change by Octopus which appears to have been made on behalf of just one single customer. It really does break many of our deployment processes in quite a paradigmal way.

Could we please have some feedback on this serious issue? We’ve taken the effort to offer a constructive suggestion as a way forward and which in our opinion would serve all.

Thank you for the additional information, and please disregard my statement regarding jobs vs deployments.

We do appreciate that this change has impacted your existing Octopus workflow, and we sincerely regret that.

We are right this moment discussing the options (including your suggestions), and we’ll get back to you as soon as possible.

We are going to implement a checkbox on the manual intervention step which will support the previous behavior. Here is the issue which you can track. And if you have anything to add to the issue, I encourage you to.

We will get this implemented as a priority.

Again, we do sincerely apologize for the inconvenience.

Thank you very much Michael, your proposal sounds like just the right solution and would be perfectly workable for everyone.

The implementation of https://github.com/OctopusDeploy/Issues/issues/5666 is now available in the 2019.6.3 release.

This reverts the default behaviour, and provides a switch on the manual intervention step for those who wish deployments to block.

Again, we are truly sorry for the disruption to your workflows.
Please don’t hesitate to reach out if anything doesn’t appear as it should after upgrading.