I have an Octopus deployment that is integrating with Atlassian’s BitBucket Cloud and Jira Cloud. I am using BitBucket Pipelines to create and deploy an image to AWS ECS, and as part of the deployment, I am publishing build information and then creating a release.

When the pipeline runs, if there is a Jira issue referenced in the build information, then the create release step fails with the following error:

If I go to the Jira configuration settings page in Octopus, I can verify that the Jira connection settings are okay using the Test buttons, and I can also see that the build information is being correctly pushed to Octopus.

Hi David,
Thanks for reaching out.

We have a GitHub with a fix for this issue:

This will likely require an upgrade for you as the workaround is to disable JIRA integration which is not a great option.

Let me know if this fixes it for you.

Thanks for your quick response. The problem is that the ticket referenced (SC-76) does exist. Are there permissions involved in the Jira <-> Octopus integration, and can we check those?

I’m sorry to see that you are facing this issue. It’s good to see that the Jira Issue is being recognised in the Octopus logs and there is an attempt to match the issue up with Jira. This rules out a lot of potential problems. 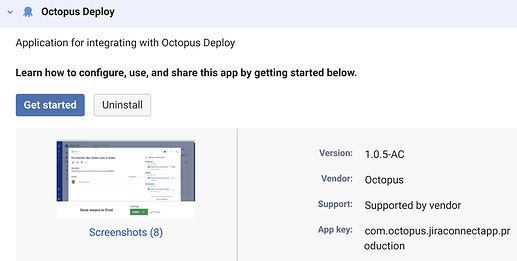 Have you upgraded the marketplace app or reconfigured anything on either end (Jira or Octopus)? Sometimes, when there are issues with Jira integration, we get the user to uninstall the Marketplace app, remove the details from Octopus and then reconfigure the connection. This has worked a handful of times to fix issues when nothing seems to be incorrectly configured.

I can also see that the build information is being correctly pushed to Octopus.

Does the “Work Items” field populate with the correct link?

Also, is your Environment set with a Jira Environment type? You can check this via “Infrastructure” → “Environments” then select Edit from the burger menu next to the environment name.

There are a handful of other troubleshooting steps available here:

Please, let me know if this gets you any further, then we can dig a bit deeper.

Build information is not showing the Work Items. Here’s what the build server logs show (this is using the Octopus Deploy pipe for BitBucket):

Meanwhile, if I look at that release in Octopus and check the build information, then I can see the following:

I have other projects which are successfully sending through Work Items. They are all using the same Octopus and Jira instances, but most of them are building with on-premise TeamCity and using its build information plugin, whereas this one is using Atlassian Bitbucket Pipelines - maybe that is a factor? And they are using different Jira projects (which is why I asked about permissions). That suggests at least that the Octopus Deploy plugin for Jira is working.

Hi David,
Thanks for the additional info.

As you are a Cloud user the fix (Azure DevOps at least) has already been applied so there may be specific Bitbucket issues that were not addressed.

It does look like the key factor is the Bitbucket Pipeline. Has the build info ever appeared in JIRA when using the Bitbucket pipeline create-release? I am trying to establish if its a new issue or the integration is just not working.
I see one of our team has commented on the GH issue and I can note this ticket there. I will pass this along to our Dev team in the meantime to take another look.

No, this is our first time using BitBucket Pipelines to integrate with Octopus Deploy and Jira. I am aware that the Octopus pipe is in beta at the moment, so it could well be a bug in the code there. I can try switching to use the more generic Octopus CLI tool and see if that makes a difference, or we can see if we can drive the bug out of the code through further investigations.

Hi David,
Even though this issue has been fixed in the Cloud your instance is on an older version than the one the fix came in.
I am asking our Cloud team if you can be upgraded sooner rather than later to get the fix applied for your version. This can be done at the next available maintenance window.

Hi David,
I have confirmed that your instance can be upgraded to the latest version with that fix applied.

I will schedule this in for you tonight during your maintenance window and it should be ready for you by tomorrow.

If you can get a chance to test it and let us know that would be great.

Thanks for your response; I look forward to your next update.

I wanted to quickly let you know that your instance has been successfully upgraded.
Please, let us know if your issue is fixed now.

Thank you for organising the update of our instance, I can see we are now running on build 9562.

The good news is that I’m not getting an error when I include a work item ID in my commit messages; the bad news is that there are no work items coming through in the build information step. I don’t know if you want to close this ticket, and open a new one, or just keep going here?

This is John, I had a look at our logs and can see that some workitems cannot be found
examples 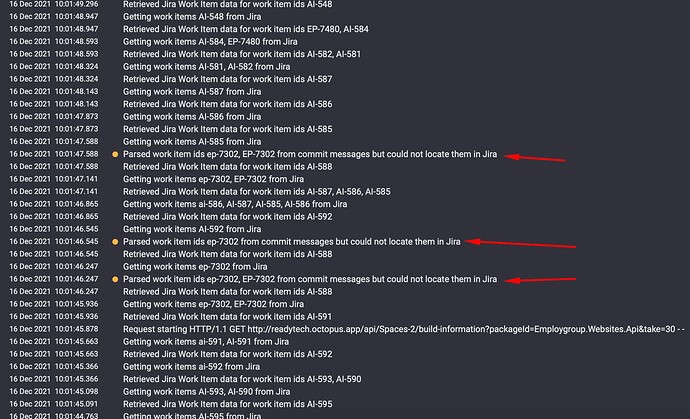 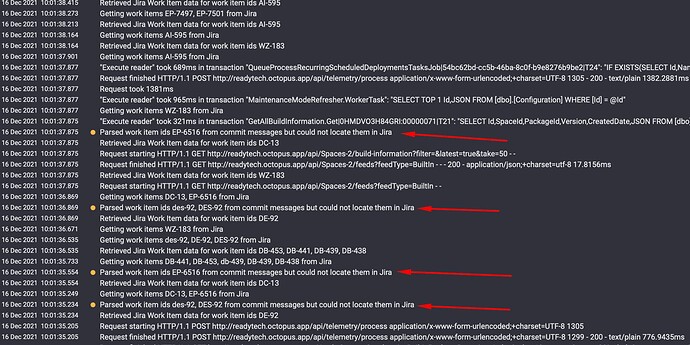 Makes me wonder if the account configured has access to see these workitems?
Has this functionality worked before the update?

I’ve had a look at the identifier issues in Jira; in some cases, the ticket has been moved from one project to another and has therefore acquired a new key. For instance, EP-7302 (the first one you highlight) is now known in Jira as AI-588, so that sounds like it might be more of a Jira issue than an Octopus Deploy one. Some of the others are blatant typos - for instance, DES-92 should actually be DE-92. Others just don’t exist at all - maybe issues that were actually deleted. The accout definitely has access to all the tickets.

The issues I am particularly interested in are in the SC project - this is the only project that uses BitBucket Pipelines to build and deploy; all the others use our on-premise TeamCity server to build and deploy. I create a build this morning to verify that the new Octopus instance would indeed fix the issue and referenced SC-46 in the commit message (and that shows in the build information commit section) but doesn’t appear in the work item section. Would you be able to check for SC-46?

Are those logs visible anywhere for users like myself, or are they an internal-only feature for Octopus support?

That is good to know that some issues have been renamed or mistyped.
Regarding SC-46, I can’t see anything in the logs regarding this one!
Do you give me authorisation to login to your instance and have a look? What is the package name?

Also, I noticed you are local, we can chat in our Slack community if you want? Join Octopus Deploy Community on Slack | Slack, just send me a dm.

Any update on this patch showing up on the downloads page? We have this issue but aren’t using cloud.

Hi @rjunruh
Thanks for letting us know.
I am reaching out to our Dev team to see if the Server version is ready to be released, or maybe a version we can provide for you with the fix applied.

I’ll get back to you as soon as I get confirmation.

Hi @rjunruh
Our Dev team say the next drop of Octopus Server will be around 2 weeks from now - most likely version 2021.3.9562.

We could provide a custom build but to be honest that might be more trouble than its worth as it may vary enough from the next release so as to potentially cause upgrade issues. I would recommend waiting for the next official release and I’m pretty sure it should be out before the end of January at the latest.

Thanks for your patience on this one.

Hi @rjunruh
Our Dev team have completed testing on a version which may resolve your issue and have given me a download link for this version:
https://download.octopusdeploy.com/octopus/Octopus.2021.3.10526-x64.msi

This is not GA yet but if you don’t wish to wait 2-3 more weeks you can try this version and let us know if it resolves the issue for you.