We’re having occurrences where developers are tired of waiting on a current deployment so they cancel it in order to get their own deployment out. This has left our deployment environments with a reduced capacity and with a mix of versions across the servers.

Aside from the obvious training issue we’re dealing with, is there a way to deny the ability to cancel deployments via Octopus’ permissions?

I’ve checked the permission list and the only “cancel” permission I see is TaskCancel. When I removed that permission for my test user it does not remove the big orange Cancel button on a running deployment.

I’ve looked through the list of available permissions but I’m not seeing anything else that is jumping out at me and none of the descriptions seem to indicate it.

Am I overlooking it somewhere?

TaskCancel should be the permission that you need to remove.
I’ve just run a test of this on 2019.12 by giving a user the Project Deployer role and removing the TaskCancel permission from that role.
The cancel button then ceases to appear for the user.

The TaskCancel permission will exist in both the System Permissions and Space Permissions lists when editing a User Role. You may need to check that it has been removed from both of these.
e.g. 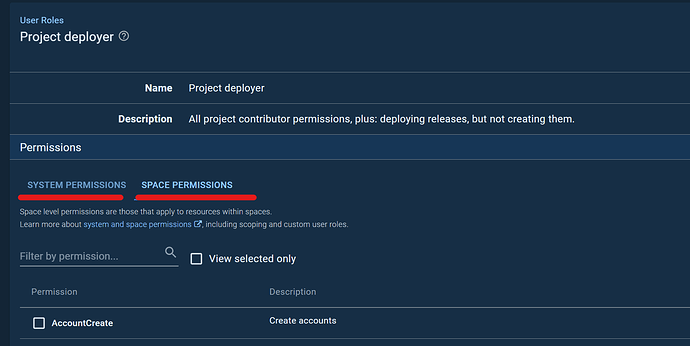 Before seeing this I had went back and redid the test removing it from Space Permissions (didn’t think of System) and it threw an error when I tried to cancel it so that would have been fine. Messy, but fine.

After reading your reply I went and found it in System permissions and removed it from there. This removed the Cancel button from the screen entirely which is what I was after.