Can no longer deploy to environment

We have a project that only has one channel and uses the Octopus default life cycle. They last deployed this project on 7/18 to production. However, since then for some reason they cannot deploy to production anymore.

I’ve confirmed there are no phases associated with the default life cycle. I did notice it does say " This lifecycle will use the default conventions. They allow deployment to any environment, so long as environments are deployed in the order that they are defined on the [environments] page. Use the Add phase button to explicitly define your own phases or to restrict the lifecycle to specific environments."

There is one environment that this project does not deploy to (UAT); that environment does appear between QA and Production in the environment list, but this has never been an issue before. (This can be seen in the screenshot that the previous releases have skipped UAT.) We did update Octopus last month, but I don’t recall the exact date.

Thanks for reaching out to us with your question regarding lifecycles and release promotion!

I can confirm that the default lifecycle conventions work in the way that you describe and have always worked that way.

Is it possible that the lifecycle for this project may have changed at some point in the past? You could track down evidence for this via our audit feature - I’d suggest using the advanced filtering on the project in question over the past few months looking for changes like this one… 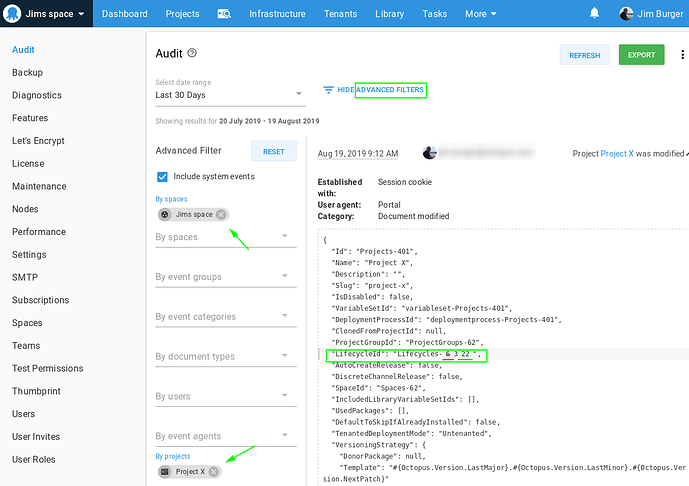 I’d also have a look in the lifecycles configuration to see what lifecycles may currently exist.

In my example I set up the following… 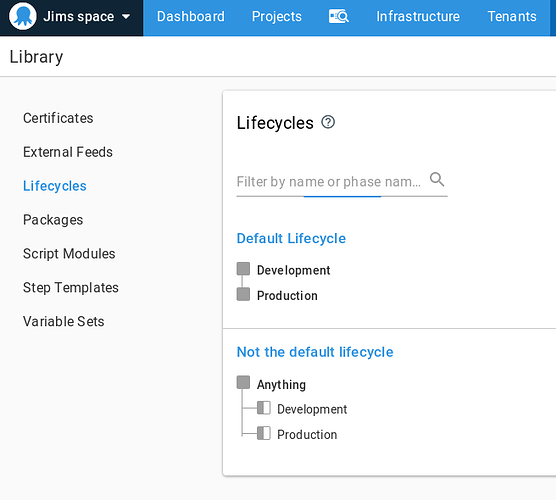 Let me know what you find.

Thanks for replying Jim!

I did check the audit table and didn’t see anything, and I just double checked it again. I filtered on just the project and set the date range from before the last successful release that went to production was created through today. The audit history is only showing one modification to the project, and that was to the role a step was deploying to. It doesn’t show me adding a new channel and lifecycle to the project on Friday either.

Looks like the filtering isn’t working as expected for me. For testing, I reset the filters and filtered by document types “Channel”, by event groups “Document events” with events included: Document created, Document deleted, and Document modified. (No project filtering) and I do see the channel I created on Friday for testing. If I add the project in question to this, I don’t see that channel. The audit history for the channel does list the project ID, which I verified using the API. Since I can’t filter the channel changes by project, the list is really too big to truly go through and find out if someone really did change the lifecycle for the channel. Also, if I export the audit history view that shows the channel I created, the “ProjectId” column is not populated. So unfortunately that’s not very helpful.

That being said, I did resolve the issue by creating a new channel with a lifecycle that matches this products SDLC.

I would like to investigate why the audit log is not working as expected, but that’s probably a new topic.

Thank you for letting us know that you were able to resolve the original issue! My colleague Jim asked me to have a look at the audit filtering problem you are running into.

I have been able to recreate the issue of channels not appearing when filtering on projects and the export of the log having the projectId as empty for the channel creation.

We have a fix ready for this issue and it should be part of the next release for Octopus Server.

Hey Kartik! Thanks for looking into that and even more importantly thanks for letting us know it wasn’t an issue with our environment. I’ve informed our support teams to keep an eye out for the update.

Sorry for the delayed response and also apologies that you felt it was an issue with your environment. The issue has been fixed and was shipped as part of 2019.7.13!