Can I automate upgrading the Octopus Deploy server?

Right now, when a user wants to upgrade their Octopus Deploy server they have to manually RDP into the VM, download the latest Octopus Server MSI, backup the database, turn on maintenance mode, and then run the installer. With HA it gets even more complex, as you have to remote into all the servers and install the MSI on all the machines as fast as possible.

Is there a way to automate that?

Everyone’s upgrade requirements are different. Some customers I work with want to be on the latest version always. They automate a process to check our website once a day. Other customers only want to upgrade when they need to. Others want to stay on LTS. Some want the fast lane, but the last release of a major version (2019.1.11 instead of 2019.2.2).

HA adds another layer of complexity. TL;DR; it is something we have discussed but other items have been taking precedence.

In this process I am going to walk through how you can have one Octopus Deploy instance upgrade another instance. In this case, I am using an Octopus Cloud instance to upgrade my self-hosted instance running on my hypervisor in my home office.

On all my nodes on the self-hosted instance I installed a tentacle. The tentacles are used by the cloud instance. One of the tentacles is marked “Primary” while all the other ones are marked secondary. 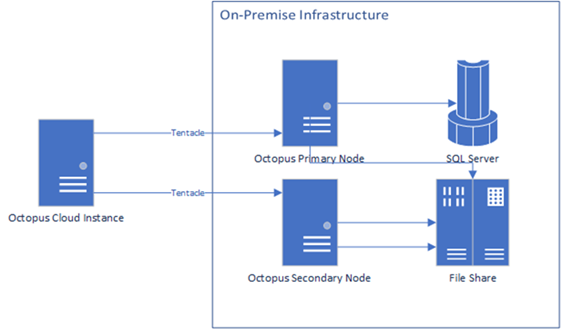 Please note: if you are using 2019.11 or higher, you should use runbooks instead of creating a new lifecycle.

My process checks a hot folder on a file share. I download an MSI and place it into that folder. I did this so I could download EAP releases from our build server when needed. After that first step, the process follows the same general rules we recommend when upgrading an HA server. 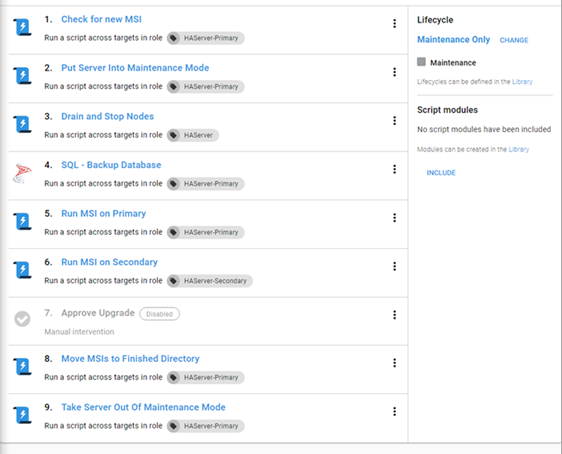 Scripts for this process

Script to drain and stop nodes