Can Channel Version Rules be Applied to the Release Version Number? 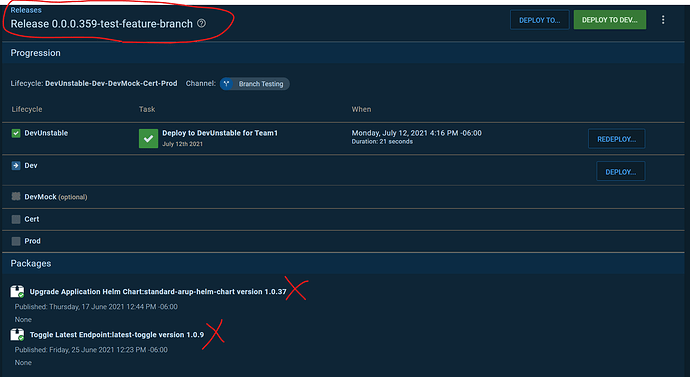 The version of the release is meaningful and it would be really nice if I could put channel version rules on it.

The versions of the packages are re-used for all release types and are not meaningful at the channel level.

When I go into the channel screen and try to create a rule without a package, I get this error: 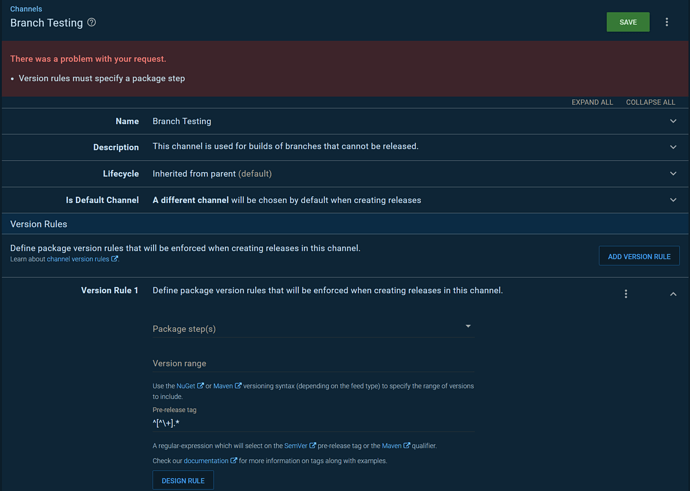 Thanks for getting in touch! Good question, and while I have an idea I’m not positive it addresses exactly what you’re looking to do.

Are you wanting to automate the way the releases are versioned based on which channel you select at create release time? If that’s the case, instead of version rules against a package step, you could create a custom release versioning template which has some channel-specific special variables available for use there. For example, if you’re wanting releases in the default channel to simply be lastmajor.lastminor.lastpatch.nextrevision, the following template will still do this, but releases created in Branch Testing will append -test-feature-branch to their release versions.

These release versioning templates are defined under the project’s Deployments > Settings page, as shown below.

I hope that helps! Let me know if that doesn’t help with what you’re looking to do specifically, and I’ll be happy to have another go.

I am realizing that the channel version rules will not work as I was hoping.

However, the code that creates this json can be modified by my application developers. So I was hoping to make a way to prevent them from pushing pre-release builds into my main channel.

My hope was that I could make Octopus reject the API call to create the Release in the main channel, if the release’s version had any pre-release (1.0.0-pre) or metadata (1.0.0+meta) values.

If this can’t be done, I may be able to enforce it using Tenants. But I was hoping to not have to use Tenant settings because all Tenant settings are lost when a project is copied. (I am making a project that will be used as a template (and hence, will be copied a lot.))

Thanks for following up and for the clarification. Sadly there’s no mechanism to control channel-selection based on the release version passed in. The closest to addressing this might still be channel version rules.

Really not sure this will help in your scenario at all, but thought I’d throw it out there.

Sorry to say I can’t think of a more satisfactory answer, but please let me know what you think, or if I can try to help with anything else moving forward!