I’m running a cloud instance of Octopus Deploy to update AWS ECS containers, and have hit a problem in my PowerShell script.

I want add Tags to my TaskDefinitions, but this functionality is not supported in the bundled version of AWS PowerShell, which is reported as 3.3.390.0. Is it possible to update to 4.0.4.0 (2020-02-05) or later where this functionality was added?

Welcome to the community, and thanks for getting in touch with us over your question!

Sorry to hear you’ve hit a problem with the bundled version of AWS CLI (3.3.390.0), but fortunately there is a way to use a later version. We leverage execution containers which will allow you to use the version of tools that you specify with your deployments in a method that provides scalability. As mentioned in our docs, Octopus Dynamic workers have Docker pre-installed and support execution containers with the exception of Windows 2016 pools.

Default containers we have created that can be found here: Ubuntu, Windows. If the included version of AWS CLI (3.3.390.0) is not high enough, you could create your own image with the version you need and use that. An example of using a container in a step looks like the following: 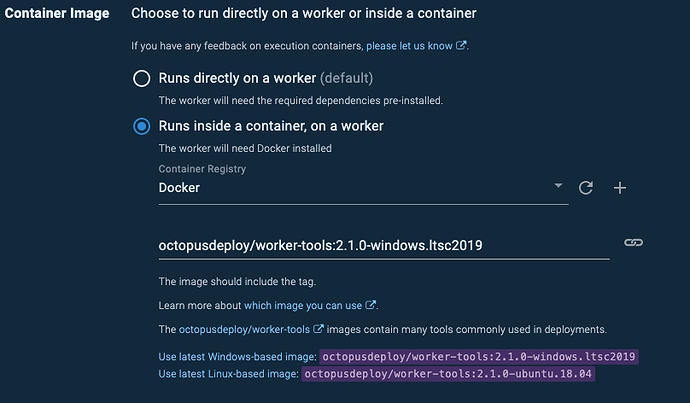 Alternatively to execution containers, you can run the script directly on the worker itself, but instead of using the Octopus bundled tools, you can choose to use tools you have pre-installed on the worker. 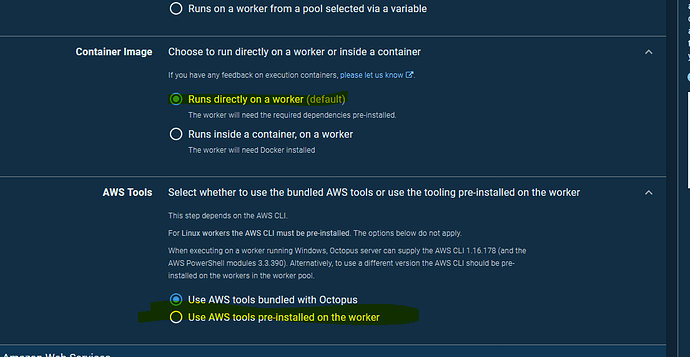 In order to do this, be sure that the tools you are looking to run on the worker are installed and linked correctly to the environment.

I hope this is sufficient to allow you to use the version of AWS CLI you’re intending, but let us know if there are any issues or further questions you may have.