I have an deployment process which includes a parent step with two child steps. The parent step is scoped against a role, but I wish to remove that role. However, when I try, I’m presented with an error -

Please select one or more roles that ‘Deploy Front Door’ step will apply to.

However, it is possible to create a step that runs on the Octopus server (that does not target any roles), and then transform it into a parent step by adding one or more child steps to it, as can be seen in the screen shot of a different plan below. 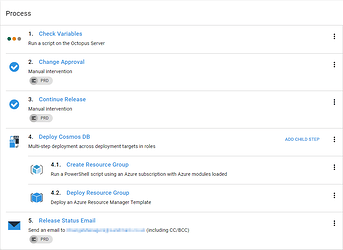 I’m not sure which one of these behaviours is a bug, as I can find no explicit mention of either in the documentation.

I’m hoping the first behaviour that I described is the bug, but can someone please confirm?

Thanks for getting in touch. This behaviour depends on the type of step used. Most steps require a role to be defined as their function is reliant on deployment targets in some form. If a multi-step includes any of these kind of steps, then it will be impossible to remove the parent role.

What step types were you using in your initial attempt at this?

Thanks for your swift reply.

As you can see from the screenshot in the OP, I have a parent step with no target role assigned that has child steps of type ‘Run an Azure PowerShell script’ (via a Step Template) and the ‘Deploy an Azure Resource Manager Template’.

In another project, I have a parent step with those same two child steps as well as one of type ‘Run a Script’. It’s this project where I cannot remove the target role from the parent step.

The ‘Run a Script’ step can be run on the Octopus Server without targeting a role, so I was expecting to be able to use it as a child step in the same way. Perhaps that is not the case here?

I’ll run this past our engineers to get their take on it, as it does feel like erroneous behaviour.

I’ve had a chat with the engineers, and this is intended behaviour. Essentially, any step that has the capability of being run against a single deployment target (e.g. ‘Run a Script’) will always require a role in a multi-step. Even if the step is set to run on the Octopus Server.

Would you be able to achieve what you’re aiming for by moving the content of the ‘Run a Script’ step into one of the other steps as a Post-Deployment script?

Yep, I can move the step out, it’ll just make the deployment look a little untidy

It just seems a bit buggy so thought I would reach out to see if there was a workaround.