I want to be able to run the same terraform syntax I’ve written locally in Visual Studio and test via the PowerShell Console to then run this same code in Octopus without changing/refactoring to fit Octopus. So that it’s generic to both ways of deploying it, one from the command line (PS) and the other OD.

So the only thing that should be different between the two types of deployment is that tfvars file that’s supplied via -var-file="?.tfvars"

My two files are terraform.tfvars for my local machine in VS and octopus.tfvars for use in Octopus Deploy

My main issue here is with the variables I’ve set in my local main.tf file for the provider being AWS, so I have the following vars

If I keep these in my tf file I get the following errors:

Is there a way I can actually set these as project variables and pull the values from the AWS account that was setup under Infrastructure > Accounts? So I can set my project var equal to the location of where account.AccessKey & account.SecretKey are stored

Or another method might be to set a value within my octopus.tfvars file which is the octopus specific vars file in my package, so for example I might have something like:

NOTE: I have already setup an Account for AWS under Infra, so this is NOT my problem. As this part is working, I just don’t want to REFACTOR my code to use one deployment process in PowerShell to use a different one in Octopus Deploy

Or I’m I missing something from the documentation? From what I read that the values in the tf & vars files override values set at the step level

Hopefully I’ve explained this all clearly and you get what I’m trying to achieve, fingers crossed

I can give you and example of a similar problem I was having earlier with using two types of values for my PEM file, as my client needed a path to a pem on my file system and in Octopus the same PEM value was set to a secret string in a project var. My way to solve this was to use the Ternary Operator condition ? value_if_true : value_if_false

And the above actually works so I can have local client side way to manage my private_key and an Octopus Deploy way, which I was pretty happy with

But I’m still trying to come up with a way to solve my accessKey & secretKey, any advice you have would be great thanks?

When I used the code in my octopus.tfvars file

I got the following error:

You can ignore the above error, I had a typo in my octopus.tfvars file and my step is now working

So this ticket can be resolved, sorry for the hassle!

I’m glad you figured it out while we were waking up here in Australia. Are you happy with the solution and can have a single file working in both Visual Studio and Octopus? This is an important aspect to me as well.

Thanks for the reply, and yes the goal is basically to have a single file

I’ve been doing my homework on trying to use conditional code in HCL and it’s a wee bit cumbersome and apparently there are issues from using a lot of conditional logic in Terraform, this is a good blog on it

Update, November 17, 2016: We took this blog post series, expanded it, and turned it into a book called Terraform: Up & Running!

My only other question now is that one of the menu items within the the Terraform Apply Step is used for Region, how do I reference that value in my tfvars file without hard coding the region variable, I was guessing it was something like #{awsAccName.Region} 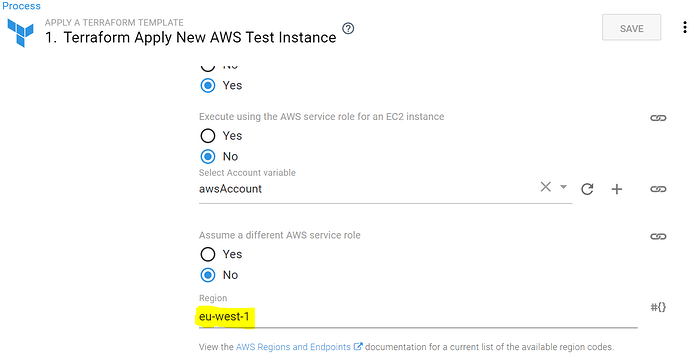 My only other question now is that one of the menu items within the the Terraform Apply Step is used for Region, how do I reference that value in my tfvars file without hard coding the region variable, I was guessing it was something like #{awsAccName.Region}

Probably the best approach is to create a project variable called something like Aws.Region and set the value to eu-west-1.

Now in your Terraform Apply step you can bind the Region setting to #{Aws.Region} and you can use that same binding expression inside your HCL.

Thanks again for the reply, just as and FYI we located this data under

“Project > Variables > Preview” then check the box “Show system variables” and this expanded the var list to reveal the system vars, where you can see Octopus.Action.Aws.Region