I am trying to set up subscriptions to send emails to AD users. Here is what we have:

The behaviour I expected was that an Octopus subscription targeted at the “Software Releasers” team would send emails to the email addresses stored against the Octopus users that are part of this team.

But no email is sent. It seems that the only it works is to add an Octopus user (not an external group) to the team.

In my investigations, I stumbled across this (posted Nov 2016), which is pretty similar
https://help.octopusdeploy.com/discussions/problems/48973-subscription-email-to-active-directory-groups

Can you tell me if there’s a better way to achieve what I want to do here?
(Am quietly hoping there’s been some development here but can’t see any evidence of it yet)

Thanks for your help,
Adrian.

Email steps look up the Octopus team, query for all Octopus users in the team and then grab all the email address for those users. So just like the ticket you pointed to, you’ll have to find a solution that puts a user in the team with an email alias.

There is the user voice link on that ticket if you’d like to add your vote to a feature.

Thanks, so just to be super clear here: your summary is only true for users added directly in Octopus.
For users in AD groups, where the AD group is added to the team, this is the exception where even though there is an email address against the user, they are not included in emails.

Please let me know if this logic is not 100% correct.

The code only checks the email address stored in Octopus. So if you navigate to

Configuration -> Users -> “the user you want to check”

If there’s an email address in there, then it’s picked up. If there isn’t, no emails are sent to that user.

Thanks, but mmm, am not sure you quite get what I mean.

There is a user, lets call him Bob, who is a member of the “Software_Configuration_Management_Team” AD group. Bob can log into Octopus. He appears as an Octopus user and this user has a valid email address.

But (and I just want to be super clear here), it seems that Octopus cannot send emails to Octopus users in teams, where team membership is derived from AD. 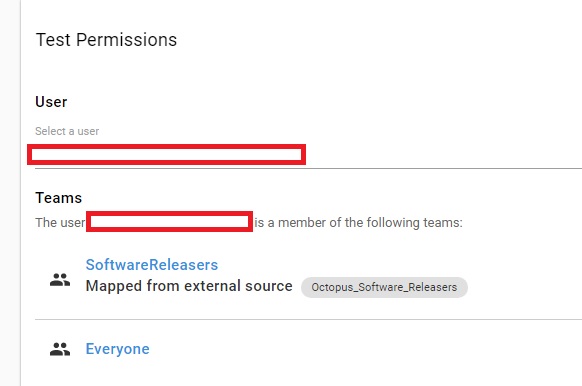 Sorry about this, you’re being very clear and I am not. Yes, you are right, we don’t send emails in the case you are describing. We only find team members added directly to the Octopus team.

No worries, just trying to make sure I’ve got my head round it.