Some nodes could not work

We have 3 Octopus Server nodes, and 2 new setup listening octopus tentacles. Strange enough, when the health check is running on one of these 3 nodes, it could pass. The other two always failed with the following log. What could be the reason?

Thanks for reaching out - this looks like an issue where your listening Tentacles might only be configured to trust the thumbprint of one of your three Octopus Server nodes. While they are a HA cluster, each node does have an individual thumbprint that the Tentacle needs to trust.

You can configure this on your deployment targets by running the Tentacle.exe config --Trust command to add another trust relationship for each of your non-trusted nodes.

I hope this helps, and please don’t hesitate to reach out if you have any further questions.

Thank you for your reply.
But those three nodes tried to connect with tentacle with the same thumbrpint **, but only one of them could work. So I think the thumbprint should be in the tentacle trust list.

That information is showing that the tentacle will only accept communications from an Octopus Server that is using the thumbprint 96539F6EA3317551E318FFBFD84A22C6FCC3C88C. Each of your Octopus Server nodes should be using a different thumbprint, so you will need to add two more thumbprints to the tentacle trust list in order for all three nodes to be able to communicate with it.

If you run the show-thumbprint command on each of the three Octopus Server nodes you should be able to determine what the missing thumbprints are.

I understand your idea, but from the log I’ve posted, the failed node also tried to connect with the new listening tentacle using thumbprint …

That is true, and it may be that the issue is being caused by something else, but to start troubleshooting further we need to at least ensure the basics are in place.

So, if you could provide the thumbprint of the node that successfully performs the health check, and then list the thumbprints for the two nodes that fail we can progress from there.

hi, as the following snapshot I’ve checked the thumbprint, and found all the three nodes have same thumbprint.

Perfect, thanks for confirming that.

The next step would be to begin working through the troubleshooting steps listed here. The initial check of the port will need to be run once from each node.

If checking the tentacle port URL from each node is successful, then the next step would be to use the TentaclePing tool to see if any additional information is revealed.

I look forward to the results of these tests.

hi, I’ve made a tentacleping/pong tests. Here’s the log file from the octopus server and snapshot from deployment target.
Output1.txt (160.3 KB)

I’m assuming the URL checks on the listening port was successful from each node to the tentacle?

The error being reported there The client and server cannot communicate, because they do not possess a common algorithm typically indicates an issue with the TLS/SSL or cipher suite settings.

You will need to confirm that each node is configured in the same way, IISCrypto can help you check and compare these settings across the three nodes and the tentacle. Ideally, they should all be identical.

Also, are all three nodes running the same operating system version? I’ve issues similar to this when running between older and newer versions of Windows Server.

Strange enough, when we run the ping/pong tests on the working node , we got the same error. It’s a little confusing.

As @paul.calvert surmised, this does appear to by a TLS cipher suite mismatch, are you able to let us know what operating systems you’re running for both your server nodes, and the target machines?

Look forward to hearing from you soon!

hi, here’s my re settings from one of server node, and deployemnt target vm. Please review if there’s any problem. 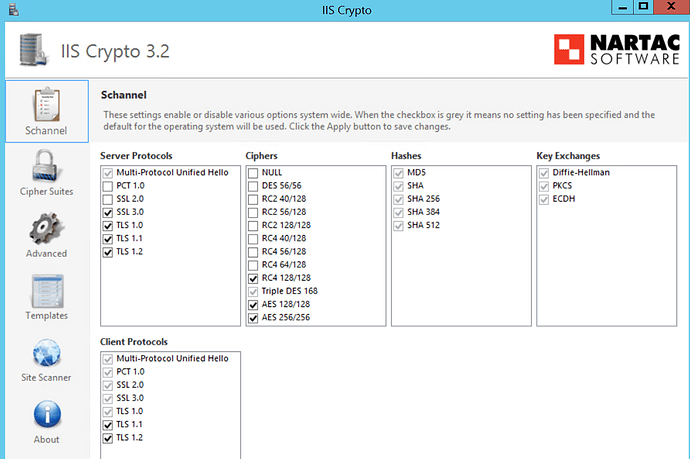 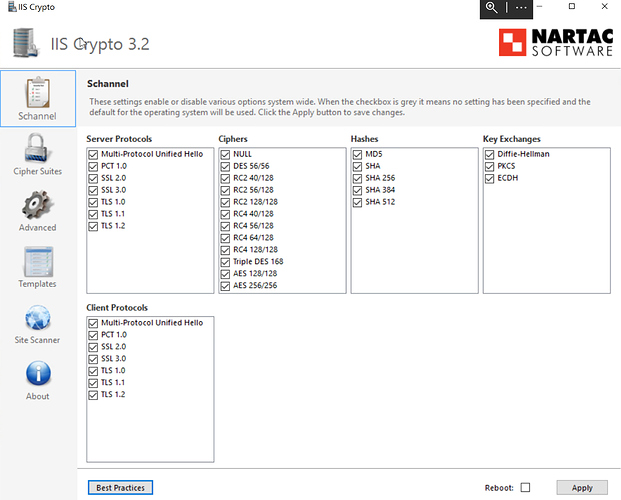 The items in the Schannel and cypher suite tabs typically need to be identical across all of the machines.

yes, the oct server 3 nodes have the same config, and at the deploy target side I’ve enabled all the options, so I think it should not be the problem of TLS, right?

and I have another deployment target with the same Schannel and TLS Settings and same OS version, windows server 2016 (version 1607 os build 14393.3808), tenacle version is 3.8.9,which could communicate with all three oct server nodes without any issue.
So what could be the reason?

just forget about the tentacleping/pong tests, the result were the same even with the deployment targets that could communicate with all 3 oct server nodes.
We might need think about other reason.

anyway, the problem was resolved after a restart of the other two octopus server nodes…