I’ve been playing around trying to get one of the documented release versioning expressions (https://octopus.com/docs/releases/release-versioning) working with automatic release creation.

I am using the expression at the very bottom of the page #{Octopus.Date.Year}.#{Octopus.Date.Month}.#{Octopus.Date.Day}.i. This is working perfectly when I create a release manually in Octopus; for example today it has created 2021.04.22.2.

When I enable the automatic release creation trigger, it successfully fires when a package is uploaded to the Octopus feed, however the release version has failed to generate properly. It generates 2021.04.22.i - it hasn’t replaced the i with the incremental number.

If I push a new version of the package a second time, I get an error in the Octopus server logs:

Presumably it’s tried to create a release with the version 2021.04.22.i, which does indeed already exist. 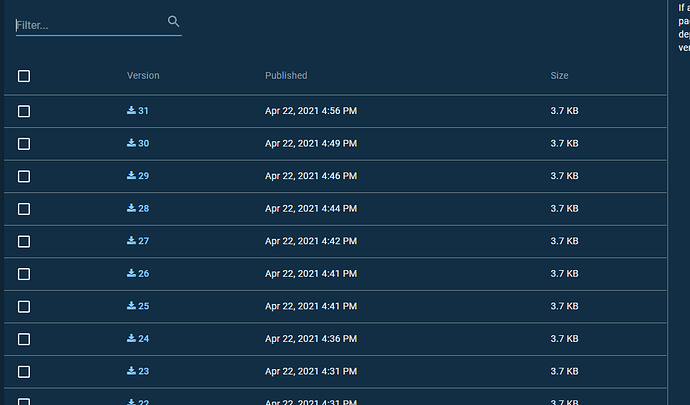 Is there something I am missing here?

Could you tell me what version of Octopus Server you are currently running? I would like to recreate this in a test environment to confirm this behavior.

Let me know at your earliest convenience.

Jumping in here for Donny as he’s off the clock, and I’ve actually hit this issue myself in the recent past.

This is actually a current known issue that I’ll paste a link to below for you to track.

Semantic Version Masks are not evaluated for automatically created versions

The workaround is to instead use the #{} syntax instead of i, which is because when releases are created automatically, the version resolves in a different place than where the i masking code is. This alternative is outlined in this doc section.

Select how the next release number is generated when creating a release.

Sorry for the inconvenience and confusion caused here. Let us know how you go, or if you have any further questions.

Thanks very much for the prompt replies. I’ve tried using the #{} syntax from the documentation as suggested. It appears to be running, but with some expected results.

I’ve pasted the expression inline into this box.

A release is triggering but it’s erroring and failing to complete.

I presume it’s erroring on the whitespace before the incremental number (it’s added 3 spaces before the ‘0’). I’ve played around with the expression by removing the whitespace around the ‘0’ but it doesn’t seem to have an affect.

Do you have any thoughts on why this might be happening?

Thank you for getting back to us.

Could you provide your current version template after removing the whitespace?

Let me know at your earliest convenience.

This is the version template I’m using now.

The moment I pasted that into here, I spotted the whitespace in the template itself.

I removed it and that’s fixed it. Thanks very much for your help.

Thank you for the quick response. I’m glad to hear you got it working.

If there is anything else we can assist with, please let us know.