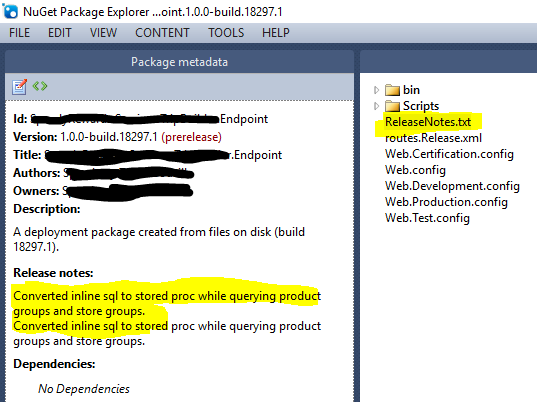 This nuget package has both the ReleaseNotes.txt and the Release Notes meta populated. I have a project created in Octopus Deploy with a Nuget Package Deploy step.

Thanks for getting in touch! Unfortunately there’s no way currently to automate the release’s release notes to pull from the package’s release notes. What I’d probably suggest is to use Octo.exe to pack, push and create-release using the same release notes file for the package and release. i.e. something like this, where both --releasenotesfile parameters point to the same file:

There’s a pretty popular UserVoice suggestion to implement something like this, and I’d urge you to give it some more votes to boost its visibility.

Additionally, the package’s release notes are displayed under the package details in the specific release’s page as shown below.

I hope this helps! Let me know what you think or if you have any further questions or concerns moving forward.

Thanks for the detailed response! I’ve voted for UserVoice suggestion

Thanks again for your response!
Mani

You’re very welcome! Thanks for letting me know, and please don’t hesitate to reach out if you have any further questions or concerns moving forward.