We now have a requirement for a jump box. This jump will be the only server that has connectivity to the load balancer.

I have set up the proxy details inside the “infrastructure” settings

Been exploring workers as well - would that work in this scenario?

Thank you and Happy Friday!

Thank you for contacting Octopus, given the details you’ve supplied, it sounds like what you’re after is indeed a Worker!

Workers allow you to offload Octopus tasks thus freeing up Octopus server resources for other tasks; but they can also act as jump boxes (your point 3); therefore my recommendation would be to read through that Worker documentation I linked to above, as well as this page which goes into more detail on which worker will suit your needs.

Note also that Workers are just tentacles, as the software agent you install is the same, but by virtue of adding the ‘tentacle’ to the Workers screen, Octopus recognises it as a worker rather than a tentacle. And best of all, they do not count towards your total number of deployment targets - so what’s not to like about workers!

So first setup a new server on the same subnet as the load balancer; then in Octopus, go to Infrastructure > Workers and install the worker suited to your needs on that new server (Windows / Linux / Mac): 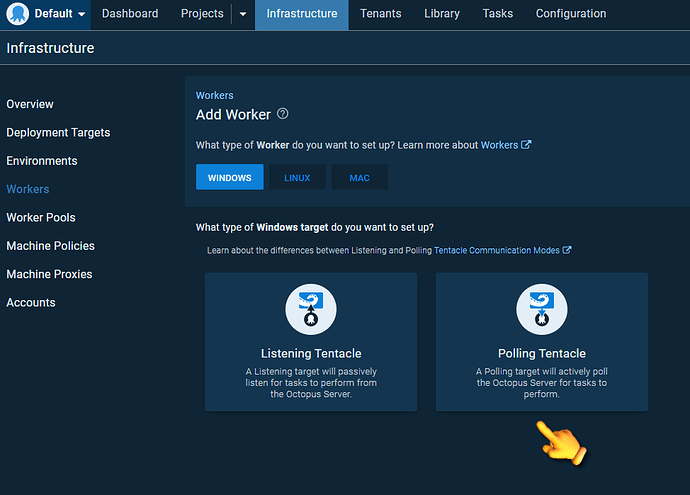 Polling workers are for those cases where the subnet doesn’t allow Internet access except for specific servers / devices. In which case you’ll almost certainly need to add an outbound firewall rule for port 10943. Otherwise a listening worker (tentacle) will work fine. 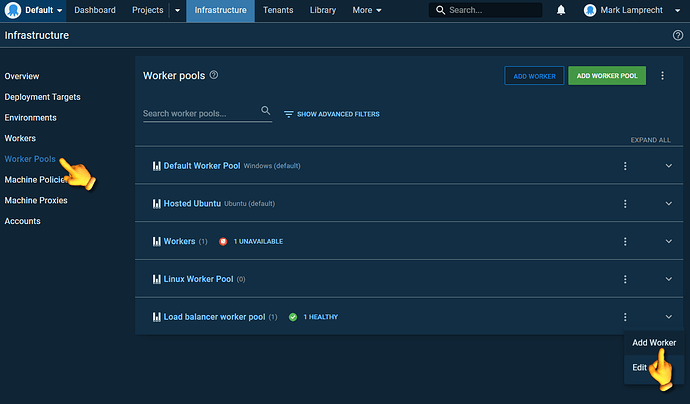 Then back in your project, edit the step that runs your load balancer’s config script and select a worker pool for your step’s task to run on.

If you look at the example screenshots below, you’ll see I’m using a worker pool that I named Load balancer worker pool, but of course you’re welcome to use your own naming convention: 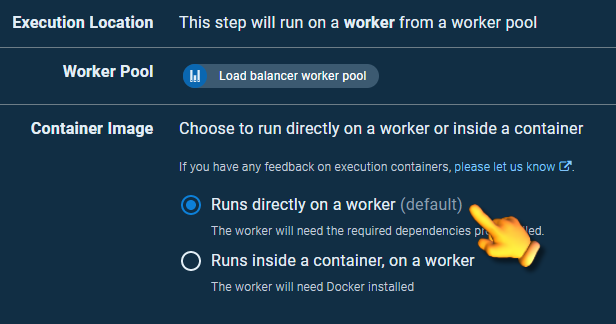 Given you need a worker / jump box that is under your control, I’d recommend you stick with Runs directly on a worker (default).

At this point, when the step runs, Octopus will pass the script to that worker pool, and to the worker in the pool, which will then execute it - and configure the load balancer as directed by the script.

In my example, there’s only one worker in the Load balancer worker pool (see the screenshot below) - which is perfectly acceptable; but that doesn’t stop you having more than one worker in a given pool; maybe you want a 2nd worker in the pool for redundancy.
So a caveat to be aware of is that if you do decide to add more workers to that pool, then all subsequent workers added to the Load balancer worker pool, must be on the same subnet as the 1st worker and the load balancer. Otherwise weird things will happen like tasks you expected to be executed on another subnet are instead executed on the load balancer subnet, eeeeck! 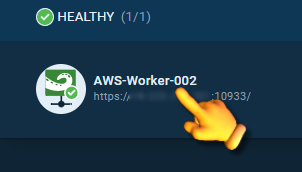 If you have any questions about workers or need more information, let me know and I’ll be happy to help where I can.

Thank you so much for explaining that with so much clarity.

Thanks again and wishing you a great weekend

Hope you had a great weekend

This worked out perfectly - thank you

Thank you for your email, I did indeed have a good weekend - especially as I was able to tick off everything on my wife’s To Do list!

I’m very pleased to hear that things went so well for you in setting up a worker - our devs have worked hard at making the setup of workers as painless as possible, so it is good to hear their efforts were not in vain!

I trust things continue to go well with your worker, but if you do experience any issues, then you know where to find us!