Hi Octopus Team
We are using Octopus Version 2020.5.0
In our last Untenanted deployment we noticed that Variable defined in Project Template overwritten the Variable defined in Project Variable. As per our knowledge, Project Template variables should transpose only when we are deploying through Tenant.
As per your Octopus Tutorial:
Project templates allow you to specify variables that can have different values per tenant/environment combination.

But its not happening in our case. We always getting Default Value in both (Tenanted/Untenanted) deployments.

I would recommend turning on variable logging, create and deploy a new release, then check the raw task log to confirm where the value is coming from for this variable.

We would also be happy to have a look at the logs for you as well. Here is a secure upload link if you would like to share your raw task log with variable logging enabled.

I look forward to hearing back from you.

Hi @donny.bell
Thanks for your reply.
As per company policy it will be difficult for me to share logs.
However, I have followed the steps and found following events taking place.

Setting Value of only Template Variable

My question is that, If we are doing Untenanted deployment, Should Octopus consider Project Template Variable?

Thank you for getting back to me. I completely understand regarding the logs. I appreciate the additional details you provided. 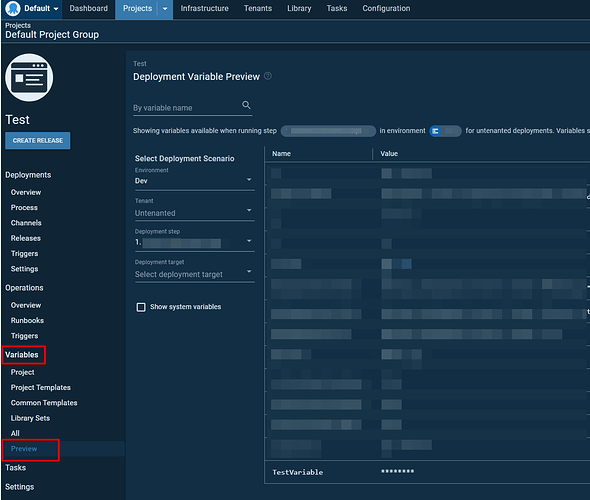 Let me know if the Variable Preview doesn’t match the Deployment at your earliest convenience.

Let me reframe my question again.

In my test environment, this scenario seems to be working as expected. If you have scoping or are linking variables to one another, this may change depending on the setup.

While I was unable to find a specific Github issue for what you are describing, we have had many bug fixes related to variables when comparing Octopus Server 2020.5.0 to our current 2022.2.7580 release.

It may be worth testing an upgrade to our latest version to see if the behavior is still persisting: Upgrading a modern version of Octopus - Octopus Deploy

If you have any additional questions, please don’t hesitate to reach out.