I’m using Octopus Deploy v2018.5.1 with Azure DevOps Server 2019.
I recently noticed that all project name drop downs in the Octopus Deploy extension (task version 2.*) have stopped working.
When I try to refresh the project name list, the underlying request fails with a 500 and the following exception “Data source with name OctopusAllProjects could not be found for the given service connection.”

I see some project related changes in the OctoTFS github, did you break something?

Thanks for reaching out. Sorry you ran into this issue. We have seen a few issues as we update our Octopus Plugin for Azure DevOps with task version 2. Are you able to test it in task version 3 to see if it works there? We are no longer patching task version 2.

Please let me know if you are able to test task version 3 and if it works for you or not.

Do you know if it’s possible to rollback OctoTfs to a previous working version in our Azure DevOps Server, so we don’t have to go through each and every build definition and change task version?

Has anything recently upgraded that coincides with the task having issues? For example, your Octopus Server version, Azure Devops version, the Octopus Extension version?

I’m curious as to what caused the issue.

As for rolling back, unfortunately Microsoft does not allow rolling back extension versions.

I think your best path forward is to either manually change the tasks from v2 to v3, or to use the Microsoft REST API for Azure Devops to do some automation and update the build steps for Octopus.

Documentation for that is here:https://docs.microsoft.com/en-us/rest/api/azure/devops/build/definitions/update?view=azure-devops-rest-6.0

Please let me know if that works for you or if you need further assistance.

The only thing that has changed is the extension version, which upgrades automatically and was last upgraded to 4.1.463 on July 23.
I can’t be certain that was the specific version that broke it, since the task has kept working during builds. It’s just when you create a new build definition with the task, that the problem would have been noticed.
If I upgrade all build definition to version 3, it will probably break at some point in the future too? 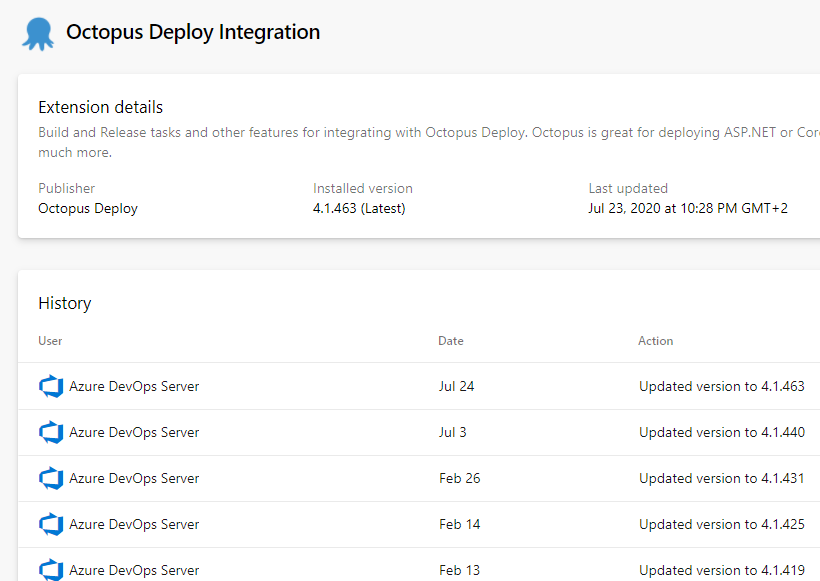 That does line up with the other issues I saw crop up around task version 2. I believe task v3 will see continued support for our older versions that aren’t Space aware, but let me speak to the engineers to get confirmation on that. They are Australian based so we likely won’t hear back until tomorrow.

Please feel free to reach out in the meantime.

No worries. Thanks for the prompt replies!

I had a conversation with a couple engineers last night and they assured me that v3 will see support for the foreseeable future. I don’t think you’ll be running into this again any time soon.

Once again, I’m sorry you got hit by this and will have to update your pipeline steps. I hope that there isn’t an awful amount that needs touched.