I am pushing a package from Jenkins using Nuget.exe to Octopus. Even though package has been successfully pushed but still Octopus is not able to find the package during the release. Where can see the uploaded package? It’s not in Library->Package

Octopus:
The step failed: Activity failed with error ‘The package Habitat.2.0.0 could not be downloaded to the package cache from Octopus Server (built-in) after making 5 attempts over a total of 0s. Make sure the package is pushed to the feed and try the deployment again. For a detailed troubleshooting guide go to http://g.octopushq.com/TroubleshootMissingPackages’. 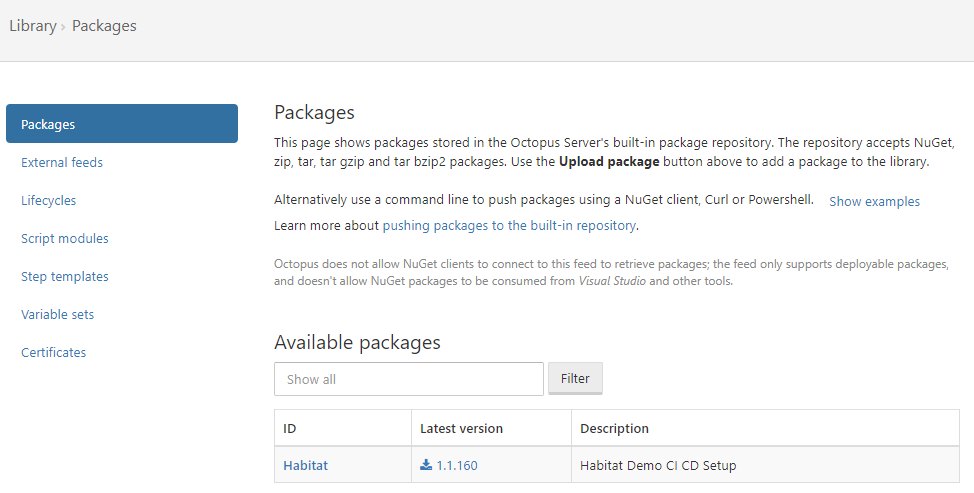 Once your nuget.exe push command has executed successfully, you would expect to see it listed in Library > Packages as you expected. If you click the “Habitat” link on that packages page, you will then be able to see all the versions of that package that have been uploaded.

Thanks fir the prompt response.

Just for the security purpose for this post, i changed the actual server name but in real they both are same. Refer my screenshot.

Package is successfully pushed to octopus but the release can’t find the artifact.

If you go to your audit log in Octopus (right after you’ve pushed the package), can you confirm if an audit entry shows up for that action? You should see something like: “Package Habitat version 2.0.0 was pushed to the builtin feed”.

If not, what audit entry does show up when you successfully push the package?

Some possible things to look for…

Does the audit trail show any evidence of your 2.0.0 package being deleted after it’s been uploaded?

Does your package contain a nuspec file, and if so, can you confirm whether the version within this nuspec file could be conflicting here?