I have 3 TeamCity build agents; 1 Windows Server 2012 R2, and 2 running Ubuntu Linux. The Windows server can run the Octopus CLI commands perfectly. However I am struggling with the Ubuntu environments.

They all have the Octopus CLI installed, and I have confirmed this by running the octo command. TeamCity can also successfully run the command. The Octopus plugin for TeamCity successfully runs octo pack on all environments, but octo push fails on Ubuntu. It appears to cut off the end of the command when comparing the log to that of the Windows agent.

Rightly, the CLI on Ubuntu complains, telling me to Please specify a package to push. The Octopus plugin for TeamCity seems to have run a truncated command. I have attached the log output from the process for completeness.

I have also ensured I followed the steps outlined in the Octopus documentation here.

Have I perhaps misconfigured a step in the Octopus plugin or in the environment itself? 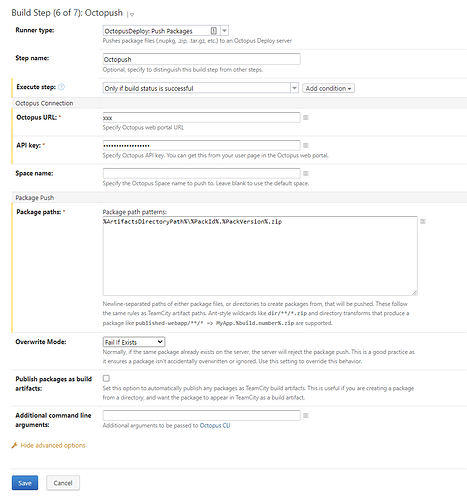 Thanks for getting in touch! I had a chat with the team about this and we have an idea about what could potentially be causing this issue.

In the Package Paths section from the screenshot you have provided, I can see that you are using backslashes for the path. Would you be able to try replacing these backslashes with forward slashes?

Our current idea is that Ubuntu does not recognise the backslashes whereas windows does, while the forward slash should function on both operating systems.

Would you be able to give this a go and let me know if it resolves your issue?

Thanks for the fast response. Your suggested worked perfectly thank you so much! I wouldn’t have expected Windows to recognise the forward slash in the same way that Ubuntu does.