Hi
I’ve installed the Octopus Deploy tool for JIRA on JIRA. I’m struggling to configure it though. Everywhere is mentioned the Configuration - Settings section on the Octopus web portal. But I’m not seeing those sections.

I’ve taken a screenshot of the buttons required to get there: 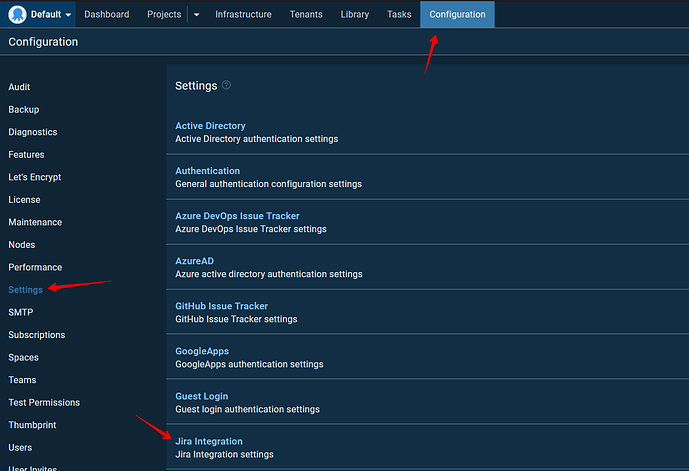 Can you please let me know if it looks like that on your end or what you’re seeing?

Nope
I’m assuming it either has to do with user permissions, or I need and upgraded account of Octopus?

Thanks for the screenshot. Yeah I think this comes down to permissions. Can you please reach out to your Octopus Admin and either have them do the setup or give you the proper permissions?

Please let me know how it goes.

Hi @jeremy.miller
I was able to get the correct permissions and am currently running my first build & deploy with the new app installed. Thanx for the assist

You’re very welcome! Thanks for updating me.

Please let us know if you run into any other issues going forward.

Hi Jeremy
So far as I can see I’ve now completed the setup. I can test in Octopus (Configuration->Settings->JIRA Integration) both the JIRA App Pw and the Release Notes Options test successfully integrate with the details I entered.
In Azure DevOps I’ve also included a step called Push Package Build Information to Octopus so that Octopus can receive the commit info from the Azure pipeline.
After this, I created a ticket in JIRA, added a few commits with the relevant key (IPD-7856), and kicked off a build (AzureDevops), and deploy afterward (Octopus). However, I’m not seeing any changes in either Octopus (where I expected to see release notes) or JIRA (where I expected to see new deployment info on my ticket)

Thanks for keeping in touch! I’ll jump in for Jeremy as he’s currently away on holiday.

My first thought is in regards to the ordering of these steps in your ADO process. Is your Push Package Build Information step configured to run before your Create Octopus Release step? This ordering is important (build info pushed before the release is created).

If that checks out, do you see any build information against the specific package (in the Octopus UI under Library > Package) or this specific project release? What you see in both those places might give us a clue as to what might be causing this unexpected behavior.

On this first one, I never had a step in my pipeline called Create Octopus Release. I’ve added one now and will see what happens when I run a build on that pipeline. It seems as though we do not push packages at all to Octopus, but rather publish them to the ADO Artifacts. Will this be an issue?

On the second one, I do not currently see any packages at all in Octopus which I can query. Probably for the reason mentioned above

Thanks for following up! That should be fine, the key important thing to point out is that the build information just has to be pushed before the release is created, as it’s snapshotted into the release.

Do you see any this info in the web portal under Library > Build Information against the specific package? Or is the issue that it’s not populating in the release itself? Would you be willing to send a screenshot showing what you see, and also the release notes template you have configured on the project (in your project’s Deployments > Settings in Release Notes Template)?

I look forward to getting to the bottom of this one!

Hi @Kenneth_Bates you ready for some serious screenshot spam?

For now, I’ve only included 2 packages (app called Admin) where I want to test instead of all 20 we have. 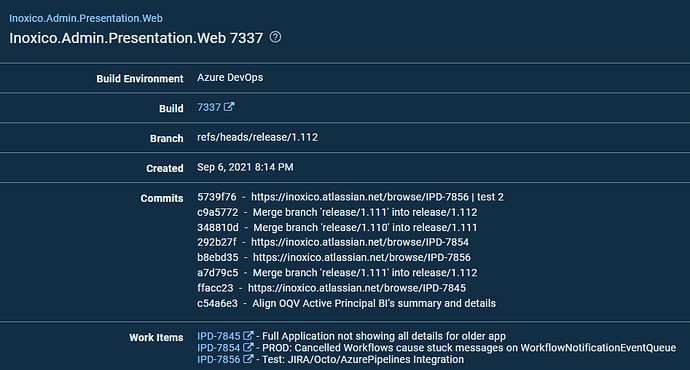 image947×509 46.3 KB
So something is working, just not sure which part yet. I might also add only 1 ticket would have had a commit in the Admin package, the other 2 tickets are unrelated.

I still have nothing under Library -> Packages
I’ve unfortunately deleted the release created after I added the step Create Octopus Release so I cannot share screenshots, but I viewed deleted the release packages and they did not have this kind of build info included as mentioned in the documentation. Although this might just be because I never actually committed anything new for that test build, I just ran the ADO pipeline to see what the new step does.

I do not currently have a release notes template set up

Thanks for keeping in touch and for that extra information! (I love screenshot spam!

Please let me know how you go or if you have any other questions or concerns at all.

I’ve included the release notes section as per your instructions, but it still does not populate the actual release. 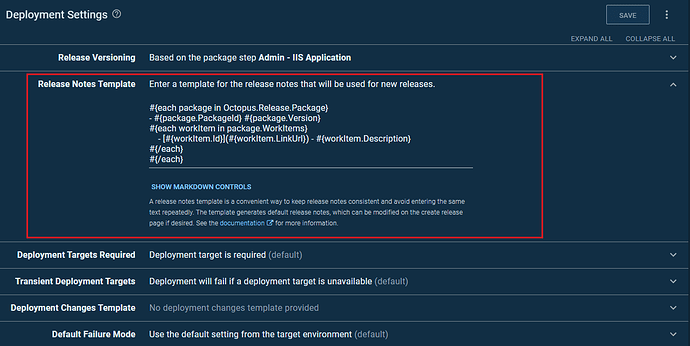 image1278×642 59 KB
However, I can see in the Library -> Build Info -> the relevant Work items with their link to my JIRA tickets. So the info is there. I see this when I click on the version url of the package

My Azure DevOps Issue Tracker has not been enabled. To be honest, I’ve been focused on getting the JIRA-Octo part working, and I assumed that since I can see my Work Items in the Library -> Build Information that the ADO-Octo part is working. Do I need to enable Azure Devops Issue Tracker?

It looks like you may be experiencing one of our current Jira bugs with this.

It looks to be this one: https://github.com/OctopusDeploy/JiraIntegration/issues/56

Could you please confirm this looks to be the same issue you’re experiencing?

Thanks for confirming. This is one of our integrations teams’ top priorities right now so if you subscribe to that, you should get updates ASAP.

Please let me know if you have any other questions in the meantime.