I’m having trouble with a pair of linux deployment targets that keep intermittently failing health checks. I don’t have much else to go on other than the following, 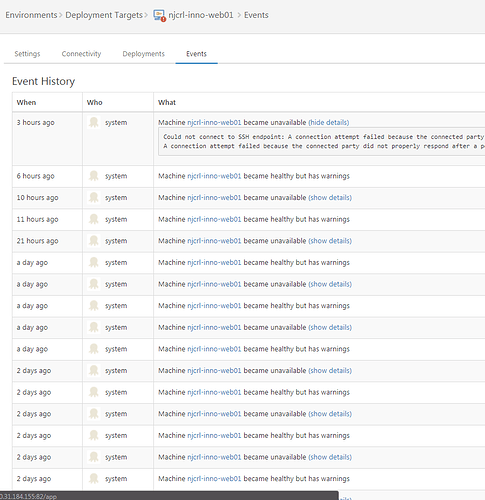 It looks like a network problem, or a problem with that target. You could try:

Thank you for the response and suggestions!

I am working on trying each suggestion, but limited in what I can do with SSH on the server itself (without having to install ssh via windows update). Is there a program/script in the Octopus program file(s) that I can run to either emulate the health check, or do and ad hoc SSH connection?

I found this thread, https://help.octopusdeploy.com/discussions/problems/45621-ssh-connection-with-failed-check-deployment-target. I ran the shell script on my linux endpoints and everything checks out.

I also ran Ping/telnet (port 22) and have discovered issues there I’m investigating with our networking team.

The best way to test the ssh connection is to download PuTTY (https://www.chiark.greenend.org.uk/~sgtatham/putty/latest.html), there is a stand alone version. There isn’t a command line tool bundled with Octopus unfortunately.

Thanks, finding it’s our internal networking.