Include targeted computers in email notification when deployment begins

i have an email notification as the first step in a process, so a notification is sent when a deployment begins. how can i include a list of targets in the email message, given a specific environment and role?

in other words, i’d like to be able to provide a particular role to this step, and list the targets in that role, for the current environment.

Thanks for getting in touch! You can write each machine that exists in a specific role using the system variable Octopus.Environment.MachinesInRole[YourRole] as shown in our system variables page.

This variable will evaluate to your appropriate machine IDs, i.e. Machines-121 Machines-141 which exist in this role. Does this variable provide the data you’re after?

Let me know how you go or if you have any further questions.

i’ve tried that, but Octopus.Environment.MachinesInRole[YourRole] doesn’t seem to be working. here is the body field from the step which sends the email:

you have started a deployment:

the email is successfully sent, but contains the following:

you have started a deployment:

it seems that variable isn’t getting recognized. how can i troubleshoot this? we’re using 3.17.8 at the moment.

Thanks for following up! You can troubleshoot variables in Octopus by enabling a couple of debugging variables to your project. Specifically OctopusPrintVariables and OctopusPrintEvaluatedVariables, both with a value of True. This will then write every available variable at the beginning of each step, and what these variables then evaluate into. You can find more info in our docs.

Your syntax looks perfect, and the variables are in fact being displayed in an email in my test on my local instance. Is the role name you’ve specified spelled correctly? Feel free to provide a copy of those verbose logs and I’ll be happy to look through them as well.

I look forward to hearing back and getting to the bottom of this! 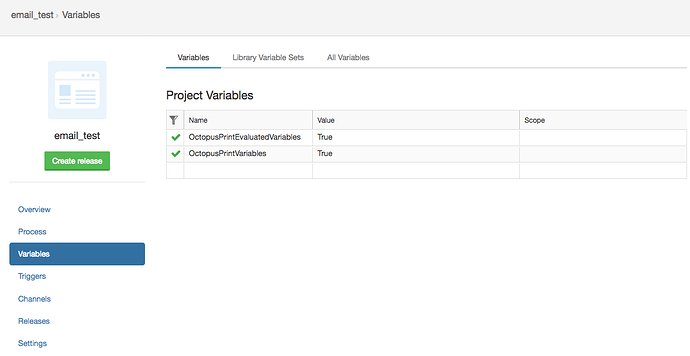 but there don’t seem to be additional details available in the logs:

Thanks for following up! Did you create a new release after the addition of the debugging variables? Whenever any change is made to your variables or deployment process, a new release needs to be created to implement those changes. Alternatively, you can update this release’s variable snapshot as shown in the image below, then redeploy this release.

thanks for the continued assistance with this-

i did create a new release, yes - see the included screen shot for release 0.0.16 showing the variables active for that release: 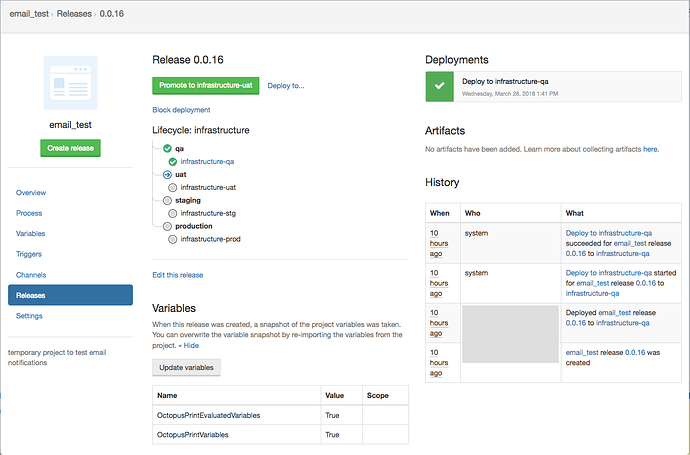 Thanks for following up! I’m sorry about the delay in getting back to you. I’ve given this a bit more of a test, and I can finally see what you’re experiencing. You should be able to retrieve the values of the Octopus.Environment.MachinesInRole[infrastructure_testing] variable if you have any other step that either runs on targets in a role, or on the Octopus Server on behalf of roles. You should be able to see more details both in the email and your deployment logs if you add any dummy step that runs on or behalf of a role, as that will populate this system variable with the correct value.

aha! thanks very much, that was the key. ultimately, i’d like to collect the values in Octopus.Machine.Hostname, and use those in the email step - how can i do this?

testing a bit, i may have answered my own question. i’ve created a step [named “collect_target_hostnames”] that runs locally on the octopus server, using powershell, which does this:

that step runs first. then, i’ve adjusted the email step to do this, for the email body:

a deployment has just been initiated:

with brief testing thus far, this seems to get me what i’m after:

a deployment has just been initiated:

is this the right way to accomplish this?

one other question - i’ve made these two steps into step templates, as they’ll be used repeatedly among numerous projects. when that happens though, if someone decides to name their “collect_target_hostnames” step something else, this mechanism fails. how can i more elegantly handle that?

Emailing machine names, and with only packages that get deployed
Kenneth_Bates (Kenneth Bates) 5 April 2018 03:03 #12

Thanks for following up! Your solution looks great, and it’s exactly what we’d recommend (I think it may be the only way). Since an email step is run on the Octopus server, and can’t be run on behalf of roles, these hostnames would need to be created as output variables like you’ve done so the email step can use them. Glad you got a great solution going! Don’t hesitate to reach out if you have any further questions going forward.