Is there any way to send a file from the Octopus server to the deployment target?

Let me give you an example of why we need this functionality, maybe it can also help to clarify the question:

All of these steps are executed on our own Octopus server as they require a lot of software and access to our signing certificate.
With all of these steps done we now have an MSIX file that can be installed on the deployment target we selected, however the MSIX is stuck on our Octopus server as we created it there.
Is there a task in Octopus that we can use to transfer a file from our Octopus server to our chosen deployment target?
If not do you have any idea how we could do something like this?

Here’s some of the things we’ve experimented with:

Thanks for getting in touch! You can achieve this by using the Transfer a Package step in your deployment.

This step allows you to input a file name and path to be transferred to your destination target. You can add this step to your process and have it transfer the file to as many targets as you need. A script step can be used afterwards to unpack or complete your deployment however you require by using the output variables produced during the Transfer a Package step.

Let me know if this helps or if you have any further questions at all.

There’s two issues with this approach:

Here’s an example for the second issue, I push the package to the feed in step 5, you can see the package is version 1.0.0-Lab-Environment-Main. When I now try to pull it to the deployment target in step 6 it pulls the original 1.0.0 package as that is the one I had selected while creating the release. 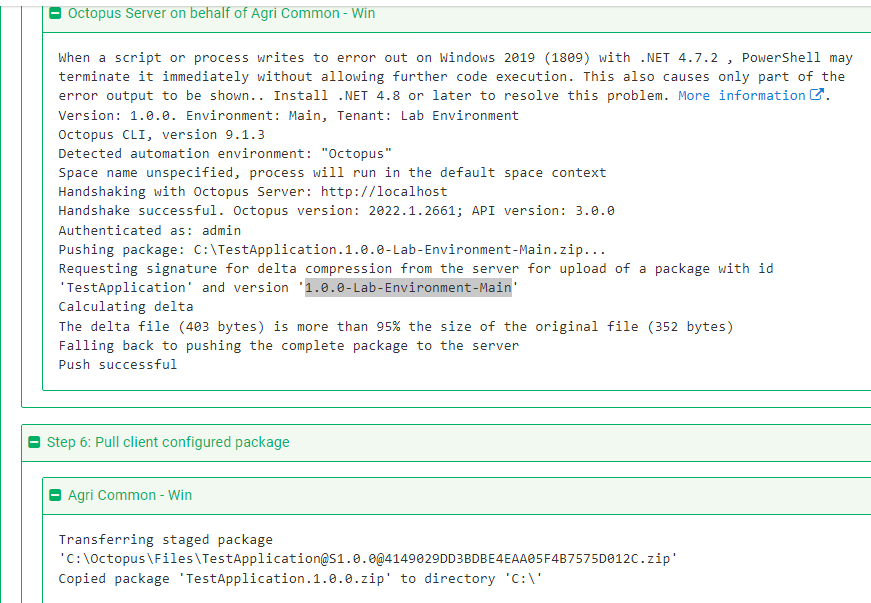 Like I said we could probably get around this issue by creating a second project that solely handles the creation of the customer specific packages but that adds even more complexity to our deploy process.

Thanks for the additional info. I think the deploy a release step will solve both of your problems.

The feature acts somewhat like a parent-child processes. You can create a new release for the child project during your deployment after the package has been pushed to the feed. This new release will have your updated package version and the parent process will pause until it’s finished. You will have to maintain two deployment processes, but this feature makes deploying them a bit easier.

Let me know if you have any questions or further thoughts here.

I’m not sure that I understand how this helps me here, let me rephrase our question using a different example situation.

Imagine we have a package MyPackage, it contains a single file Tenant.txt which is completely empty.
When we create a release we want two things to happen:

In my mind there are two solutions to this issue:

Like I said as far as I know option 1 doesn’t exist so we’d have to use option 2 (or an alternate option that I don’t know about).

The issue with option 2 is that we need to select the version of the package we want to deploy to our target when creating the release, we can’t do that as that this version gets created in the release.

An extremely oversimplified version of the process could look like this.

I also tried using the Deploy a Release step as you suggested but I don’t see how this fixes the issue.

Do you have any ideas on how to overwrite the version mid deploy or set it to a variable we can modify in the script? Or maybe another option that bypasses the feed entirely?

Thanks for the further clarification. I can see where you’re stuck and have some helpful info, but I should also note that Octopus was not entirely designed to function like a build-server with the handling of new packages in the feed during deployment. Octopus generally assumes the package is ready and complete deploying and configuring changes on the target side of things.

That said, there are usually always multiple ways to do what you need in Octopus. The suggestion I made last message to use the deploy a release step should still accomplish your goals, but isn’t really built to handle new releases being created during its deployment. If you know the release version which will be created for the child project, you can manually enter it as a specific version. You will see an error on the next page warning you that the package with that release version doesn’t exist. However, if you have a script to create the new release you have specified, it will be picked up correctly.

This method makes the process a bit less automated when using the UI, as you will need to know which version of release that will be created during the deployment.

Another method would be to avoid using the deploy a release step and keep the two projects separated entirely. You can create the package(s) and have them modified for each tenant, then you can use Automatic Release Creation alongside an Automatic Deployment Phase in your lifecycle.

This second method is a bit messier and doesn’t give you as much fine control. The Automatic Release Creation feature is somewhat legacy and not out preferred way of automating release creation. (We favour the use of octo.exe from the build server.)

I think I’ll hand this conversation over to our solutions team who might have some further tricks or cleaner suggestions to help you out here. Furthermore, they’re in US/UK time-zone whereas I’m all the way down in Australia. Their hours will better match yours and they will be able to provide faster responses moving forward.

In the meantime, feel free to let me know if the above info helps you at all.

Thanks for the help, we’ve managed to get a working PoC by using the first method you suggested. In our PoC we push the updated packages as dynamic packages so we can reuse the release for each tenant/environment combination.

If there really is no way to merge these 2 projects into 1 project then so be it, we’ll just have to learn to live with the complexity but we absolutely need a way to choose the version of the child project using octo.exe otherwise our implementation is blocked again.

Thanks for getting back in touch with us, I understand the concerns and the questions that you have.

I’ve reached out to our solutions team who should be able to provide either a pathway for you to better perform the actions you’re looking to perform or confirm whether the suggest “Deploy a Release” step is the best option for your use-case.

We’ll be in touch as soon as we can with any additional information, don’t hesitate to reach out if you have any further information or any questions.

Hey @yenti.verle , my name is Cory and I work with the customer solutions team here at Octopus. I wanted to reach out and let you know that I’m taking a look at your use case, and I’m hoping to have some more information and resources for you a little later today.

In the meantime though, I want to confirm a couple of details about your end goals to make sure I’m on the right track -

At the end of the day, your ultimate goal is to create a release (we’ll call it 1.0.0), select a tenant (CompanyA) and environment to deploy to, click deploy, and the following happens:

Are the steps above correct for your intended goal/use case? Please let me know if there’s any specific content missing, and I’ll try to find some recommendations to help you model your goal state within Octopus.

Some other general notes and questions -

Look forward to hearing from you soon!

The ultimate goal for us is to be able to create a MSIX on our Octopus Server and then download that MSIX to the target of our current deployment. The MSIX creation and deployment process doesn’t matter much here which is why I later simplified it to the MyPackage example.

The process you’ve linked is exactly what we want our end result to be, our PoC currently does the following (using two projects):

To answer some of your questions:

I hope that information can already help you understand our situation a bit better.

. In the real world we’ll be creating the release of the “parent” from an Azure DevOps pipeline using octo.exe, however we run into an issue here because the version of our “child” to deploy has to be set manually (as it gets created by the parent). Using the GUI we can simply use this field:

But as far as I can tell we can’t set this using octo.exe. Again this is probably something I’ve overlooked in the documentation but it is an absolute necessity for us to be able to set it this way.

Thanks for sharing that additional context, that’s very helpful! We’re definitely biased, but ultimately we just want to make sure you’re getting the best possible experience within the product for your deployment and automation projects!

To answer your specific request - check out these docs on the create-release command for some information on the various ways to specify package versions for your projects using the CLI. If you have any questions or run into any errors, let me know and we can work through debugging the output.

Once you get your process stable and running, please feel free to reach back out either here or through the advice@octopus.com mailbox - we’d love to help as you continue iterating on and modernizing your pipeline!