I installed the Octo tools locally on the build server using these instructions: https://octopus.com/docs/packaging-applications/build-servers/tfs-azure-devops/using-octopus-extension/install-octo-capability

I can see the Octo capability is registered on the server: 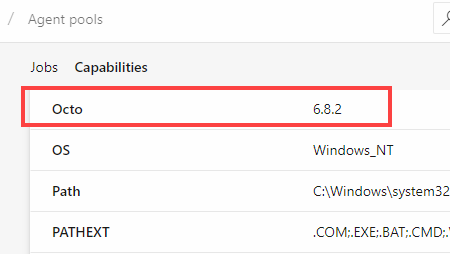 I don’t want the Octopus step “Push Packages to Octopus” to try and update itself to the latest CLI tools. How can I troubleshoot my issue?

Thanks for getting in touch! You should be able to get around this by adding the Octopus Tools Installer step at the start of your build and specifying embedded as the version. This should avoid any attempts to download octo.exe externally.

We have a small section on this in the following documentation page.

This guide covers how to add Octo as a capability to your Azure DevOps/TFS custom build agents.

Let me know if you have any questions here, or run into any issues.

Setting it to “embedded” worked. Ideally I would like to not need the Octopus Tools Installer step.

Thank you for your help!

Thanks for the update! I have some input from a developer on this.

It adds the version of Octo which is embedded along with the installer task to the tool cache and adds it to the path. The only difference in how the tool is resolved between the installer task and other tasks is that we don’t embed Octo for those due to Azure DevOps Extension size limitations.

If Octo has been installed as a capability it should use that version automatically since all paths to resolve Octo as a tool uses the VSTS/ADO tasks library to do so. This means adding an installer task at the start of the deployment process with the version of embedded is the closest in terms of behavior to v2 of the extension which embedded Octo into every task.

If you have any questions here, please feel free to let me know.