We have a complex Implementation, were we deploy 3 Murex modules. Currently we have a Default channel, where we can deploy all 3 modules sequentially one after the other.

We are also making use of guided failure mode to allow retry in case of any exception.

Problem: if there is any failure in one of the fiery module, release is result in failure and we can’t deploy second and third.

When Run condition is now set to success of previous step — on failure of step 3, steps 4-6 gets skipped

When Run condition of step 4 to 6 is set to always, the steps are being invoked but there is a problem.

In case if user decides to Abort the Manual intervention take, then release should fail or abort but bec of Always condition, step 5 to 9 is invoked.

As per official documentation, the run condition should check the previous step state and act on.

Is there any way we can achieve this? Please help.

Thank you for reaching out to us with your question and providing me with some great detail here.

Having a look through your scenario, I would like to go off and do some further investigation with this in my local lab environment to see if I can help come up with some ideas for you here.

Hopefully I can get back to you over the next couple of business days with some ideas here (based on what you have already told me).

Some initial thoughts that spring to mind here (and what I will also take a look at) would be to explore the following (if you have not done so already).

Can I also just check with you about the deployment process itself:

Can I just check to see what version of Octopus you are running too (in case there are any limitations with your version).

Thanks for your response in short time.

Will update by tomorrow on the official version being used in Bank.

Murex is the application, we are trying to deploy using Octopus Deploy.

Have written separate process/steps to deploy these 3 components separately and also added a channels as an option where, users can deploy each components individually.

However on the Monthly or Major releases, we need to deploy all three components and its sequentially deployed one after the other.

Each of these components have a manual intervention task, where user can approve or abort the release Rishiyur before deployment of each component. Also guided failure mode is enabled which allows re try.

There are cases where some times in case of any failure in first or second component, due to some env specific or dynamic confit error, which needs to be fixed manually.

In such cases, we need to deploy other components, and report deployment as partial succeeds as some manual fix will be done.

Have not yet tried conditions based on variables, will be helpful. Also open for other options

Please let me know if you need more details.
Happy to share.

Thank you for the update. I have taken a look at some possible ideas for you which may be of some interest or things you may want to consider:

Setting each step with the variable run condition:

This will have the effect of:

My deployment task looks like this when I go through using guided failure: 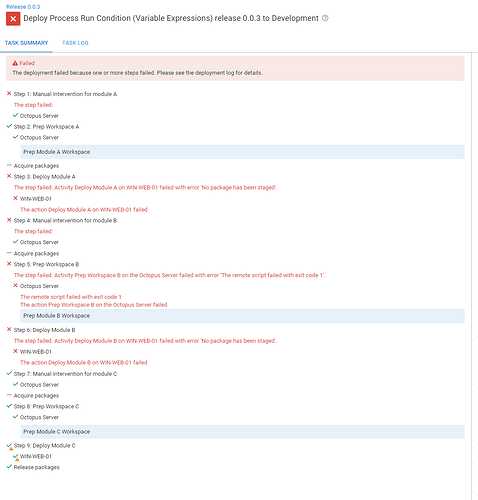 If you wanted more control e.g. you didn’t want step 3 to run if step 2 failed, then you could update the last steps (prior to the manual intervention) to a run condition like so:

This would skip the step if the previous one failed. The other steps e.g step 3 could just keep the condition like #{unless Octopus.Deployment.Error} .

Idea 2: Separating modules into individual projects and using the “Deploy A Release Step”

I also wanted to float the idea about potentially splitting out your deployment process and coordinating this using a project to deploy your modules independently (while keeping the order).

From the image below I have 4 projects, 3 are the individual modules and a project to Orchestrate these “Module Orchestration Project”.

Within my orchestration project I am using the “Deploy A Release Step” within my process to deploy these (with guided failure enabled):

From my testing, when I set the step to fail it will only fail the module that is not deploying correctly and will move onto the next deployment.

Doing it this way as they projects have been separated out they are actually independent of one another and will act as 3 separate deployments within Octopus itself.

As you can see from my deployment task log, module 2 failed but I could still successfully deploy module 1 and 3:

Another idea I tried was to use child steps within my deployment process (with guided failure enabled). This was to try and keep this all within the same project and process:

In my test, I configured both module 1 and 2 to fail here. If I abort the Manual intervention step, guided failure will trigger and I can then also fail the step(s), but my deployment process will continue through the steps (ignoring the child steps from the failed step).

From my deployment log here I have a failed deployment for steps 1 and 2 but can see that Octopus still continues to deploy step 3 here: 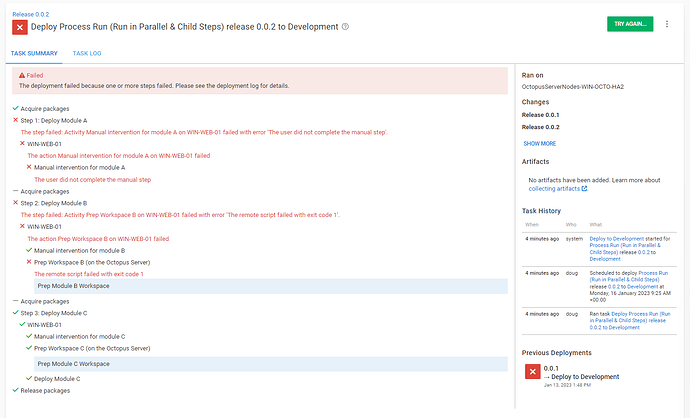 An important note her is that once you make a project version controlled you can no longer switch this back as it is a one way option, so please make sure you understand this before making these decisions.

Or another option is to Clone your project and test against this in a safe way before modifying your main deployment process.

I hope this has helped to give you some ideas or things to try here. Personally I feel the best approach would be looking at using variables within the run condition to help build out your logic for your deployment process.

I appreciate there is quite a bit of information here, so, If you have any follow up questions for some of the ideas, please feel free to reach back out to us. If not, then good luck.

Thanks a lot Doug.

These steps will help us and give more options. We have enabled confit as code and will give a try on these options.

Thanks again for all the help and support.
Have a great day.