Deploying Multiple but Distinct Instances of the Same Package

I see there have been a couple of previous posts about the similar subject, but none have actually resulted in a suitable or clean solution.

It could be done by creating a step for each gateway (no way!), or with some horrifically complicated Powershell, but do you, our Octopus saviours, have any cleaner solution in the available or in the pipeline that might address this?

By looking at your scenario, multi-tenant deployment seems like a good fit. Basically each instance is a tenant and has its own configurations, that way you can just have 1 step.During deployment, you can specify what tenants you would like to deploy, also by tagging the tenants in a group, you can deploy to a tag, Octopus will work out what tenants are invoked.

I would suggest to have a look at our tenant document from here if you have not done so yet.

Hi Eddy, unfortunately that will not be suitable. We already use Tenants for their designated purpose. And that doesn’t seem a lot different from creating a step for each one. We literally might have 100+ instances of the same package deployed to a server - really needs a dedicated step template that maybe reads off a config script, perhaps?
Sam

I am just wondering at what situation tenant does not fit?

Ok…I think I begin to understand…so, it would be one step, with all the config as Octopus variables…each version of the variable would be scoped to a particular instance Tenant, right? And as long as I select all those tenant tags when I deploy that step, multiple instances of the service will be deployed? All configured according to each tenant-scoped variable?

Yeah, only one step and the rest should be done by variables. A project can have Project Templates and Common Templates which define tenant specific variables. You could get more info regarding tenant variables from here

Normally I’d give Octopus 110% for clarity, ease of use, and ‘covering all bases’, but I do kinda feel this is an area that could use some feature development, especially with the trend towards microservices. Perhaps process steps could have a flag called ‘multi-instance’, for example, when if checked, lets you assign Library Sets, or another mechanism, for defining a multiple instance deployment of one component.

I use Tenants for their original purpose, that is, to define feature sets specifically per customer.

@Eddy_Ma Hi Eddy, I’m trying to use Tenant Tags to differentiate all the instance of our product ‘Elvis’: 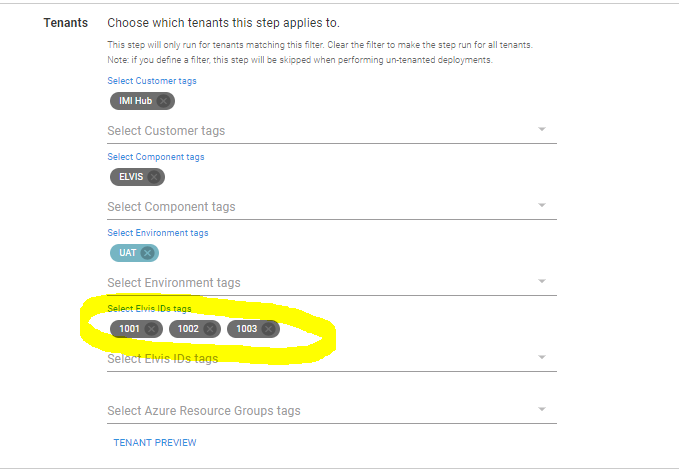 but I am still only getting one instance deployed:

Do I literally have to create a new Tenant, not Tenant Tag, for each instance of the software I want to deploy?

This is how our Tenant page looks so far (all the tags under IMI Hub are my attempt at create tags for the software instances): 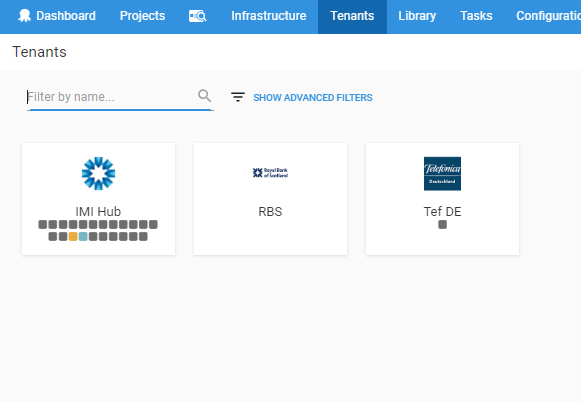 It’s gonna get pretty chaotic if a new Tenant is required for each software instance!

Or am I still not doing something right?

Firstly, with regards to Tenant Tags, they simply provide a convenient way to group and target sets of Tenants.

Do I literally have to create a new Tenant, not Tenant Tag, for each instance of the software I want to deploy?

There is another alternative which may be a better fit for you, and may work better than using Tenants: Create a separate Deployment Target for each instance of the service you need to install.

If you need to vary the deployment parameters slightly between each Deployment Target, you can do this using the Project Variables. There are two options for how you can configure these variables:

So if the deployment of each of these instances are truly separate and independent (does it make sense to deploy 1 of these services without deploying the other 99?), then Tenants might work well. If they all should be deployed at the same time, or there is other work that should be done as part of this Deployment, then Deployment Targets is probably the best fit.

Hope that helps, let me know if you have any more questions, or if you need help scripting against the API.

Thanks Tom. Neither methods really suite the ‘clean’ design we like to maintain in Octopus, so I will raise it as a feature request.