Deleting Library Variable Set Does Nothing

I have a Library Variable Set that I have realized I have not been using. So I decided to delete it.

First I went to the project was using it and removed it there. I got some semi-scary warning about Tenant snapshots losing data, but since I have not been using it, I proceeded. That seemed to go OK.

Then I went to the Variable Set in the Library and selected delete from the menu: 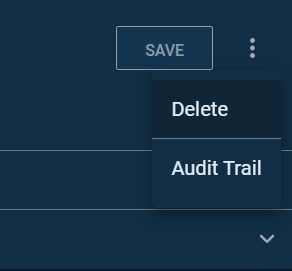 That caused this dialog to appear:

I selected “Delete” and … nothing happened.

I have tried it a few times… I have waited a few minutes… It is still there. It does not give any errors of any kind.

What can I do to delete this Variable Set?

NOTE: I am able to remove all the variables out of the Variable Set. I did this, but it still will not delete. Do I need to go delete the Releases and Runbook Snapshots it is used it? (If so that will be tedious.)

I would like to suggest that this is a bug. At the very list some kind of notification should let me know that I am not allowed to run that delete (and say why).

Thanks for bringing this to our attention. Typically, there is an Error output for this exact Variable Set deletion scenario. It would look something like this:

Could I please know which version of Octopus Server you’re currently running? This could be a bug as you suggest.

For future reference - instead of Deleting each release you can Update Variables by navigating to Project > Releases > Select the Release > Variable Snapshot > Update Variables:

This will remove Variable Sets that are defined in older releases.

I hope this helps! Please let me know if you have any additional questions.