I have a project that has a web, api and db that I want to deploy at the same time in OD but with different OD-processes.
From TFS I would like to use “Create Octopus release” and deploy with process “Project”. “Project” will have three processes to deploy like “Project.web”, “Project.API” and “Project.DB”. In “Project” I use the step Deploy a release but it seems that it only would like to deploy release, the release is not created? I get the response "The step failed: Activity xxxxx on the Octopus Server failed with error ‘Unable to load Release with version 0.1.0-unstable.2259’.
In TFS I would like to call Project and Project in OD shall deploy the three other processes. How can I do that?
I tried to have three steps in TFS with Create Octopus Deploy for Project.web, Project.API and Project.DB but then it also deploys these three steps in OD. I tried this in a workaround to create release but it also deployed.
BR, Linda

Update: I now push packages to Octopus buiilt in server and I can see the packages in Library->Packages but the projess “Project” throws ‘Unable to load Release with version 0.1.0-unstable.2292’ 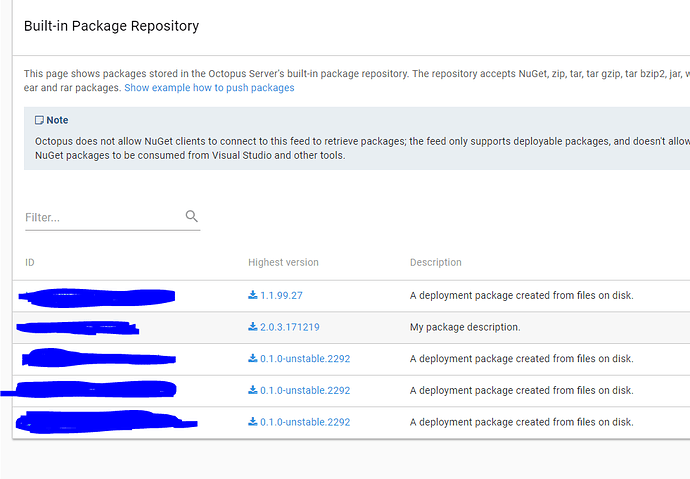 image.png981×682 45.8 KB
In for example “Project.web” i specify: it shall get the Nugetpackage from octopus server (built-in):

Thanks for getting in touch! I’m sorry about the delay in getting back to you. The Deploy a Release step isn’t actually able to create the release of the child projects during the deployment. The releases for the child projects have to already exist. There are a couple of potential options that may help.

Since the packages are pushed to the built-in repository, you can configure Automatic Release Creation (ARC) for your child projects to trigger release creation based on the package being pushed. If you configure ARC to create the releases, and then deploy the parent project afterwards, the latest release version of the child project will be selected.

Alternatively, you could create the releases of the child projects via TFS prior to deploying the parent project.

I hope this helps get you going! Let me know what you think or if you have any further questions.

Thank you Kenneth!
I managed to solve it with your advice. I created three releases from TFS with no auto-deploy in the lifecycle. And then a release with autodeploy that starts the three child projects.
Br, Linda

You’re very welcome! That’s great to hear you got it solved! Don’t hesitate to reach out anytime if you have any further questions or concerns in the future.