Could not find certificate with thumbprint in store

I am deploying an IIS website that has two HTTPS site bindings that use different SSL certificates.

I am running into the following exception:

You can see that both certificates are found, but in two different locations:

I dug into the code a bit and in iisWebSiteBeforeDeployFeature.cs the site bindings are iterated over: 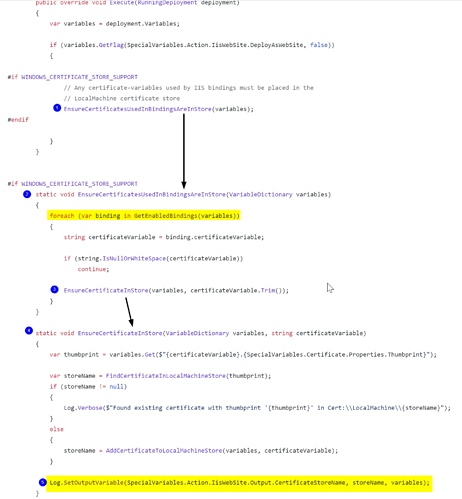 But notice that the SpecialVariables.Action.IisWebSite.Output.CertificateStoreName is set to the last certificate store name we found in all site bindings.

In iisWebSiteAfterPostDeployFeature.cs we reference SpecialVariables.Action.IisWebSite.Output.CertificateStoreName for each binding that we are checking and it is possible that this store name might not always be the same (as shown in my example): 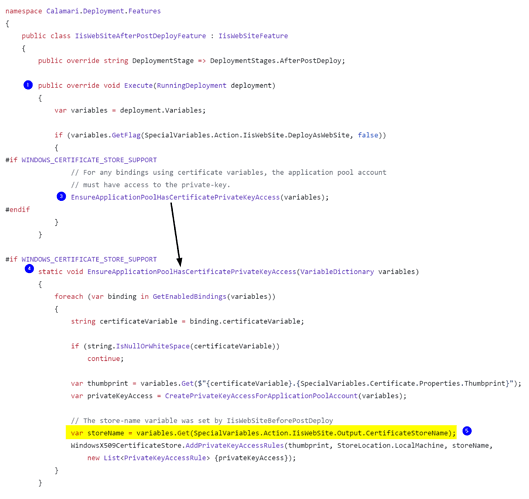 Which ultimately results in the following exception:

As a workaround, I ended up installing the certs in both root and web hosting to ensure that this step wouldn’t fail during deployments. But I still feel like this might be a bug as shouldn’t these scripts be looking in the Personal or Web Hosting store only and not Root for SSL certs for IIS bindings?

Thanks for getting in touch. I will work with our resident certificate expert and figure out whether this is the right behavior.

Any updates on this?

Sorry about the delay. I’ve open an issue for the multiple-store bug.

As for the location, we want to cast the net as wide as possible even if the IIS UI doesn’t.