Build information: include all commit since previous release

We’d like to push build information for a package along with every release that’s created by our CI/CD system (CircleCI).

The build information should contain all the commits since the previous release, so that those commits can be included in the release note.

In order to generate the list of commits in this example, we need the VcsCommitNumber of the package in the previous release. Once we have that hash, we can easly fetch all the commit since then…

… and generate the Commits array in the JSON from that.

Getting release info via …

… is not sufficient, as it does not return build information of the package.

The CLI does not appear to have a get-build-information (or similar) command.

What is the recommended way to fetch the build information from the most recent release?

Any other guidance on how to produce the list of commits when pushing build information?

Hi Shawn, thanks for the quick response!

However, if the build workflow fails for any reason - for example, after a bad merge - there won’t be package and there won’t be a release for the commit. In that case, we’d like to add the commit to the build information next time the build succeeds.

Or in other words: the build information of every package should contain all the commit that were pushed since the previous package/release (which most of the time is just a single commit, but not always).

Does that make sense?

I think I’m following, but a call may help make sure we’re on the same page. Is that something you’d be up for?

Looks like it can’t be done through the CLI but we can retrieve the build information’s VcsCommitNumber from the /{baseSpaceId}/projects/{projectId}/releases API endpoint: 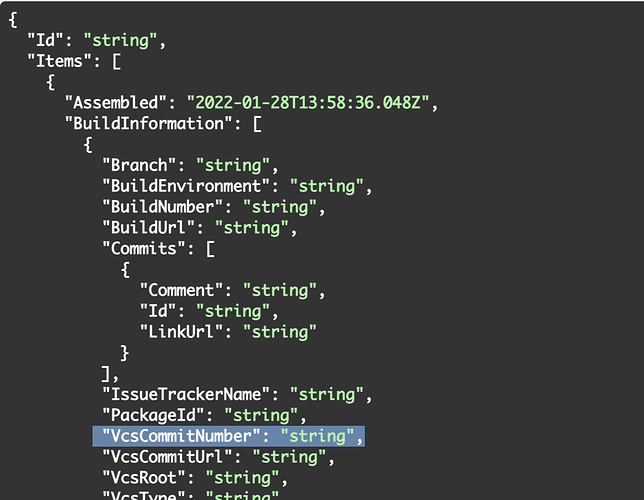 Nice! Glad you were able to get it working, please let us know if we can be of further assistance.