I have a deployment where TeamCity builds and creates Octopus releases. Our deployment process in Octopus then deploys the release, we run some automated regression tests, and that’s it.

What i’m trying to do, but can’t quite figure out how to do, is to also do a rollback if my tests fail.
Has anyone done anything similar or have any tips on how i can have a step that finds the last successfull release for the current environment and re-deploy that release?

Any advice would be much appreciated.

That is an interesting question. It is possible to do that, but you’ll need to leverage the run a script step with Octopus Deploy API. As much as I’d like a step like that to come built-in, automatically re-deploying the last successful release is like “playing with fire.”

You’ll have to contend with triggering the step. In your step that runs the integration tests, I’d recommend setting an output variable at the start. For example:

The step that will automatically trigger a rollback will need a variable run condition set to: 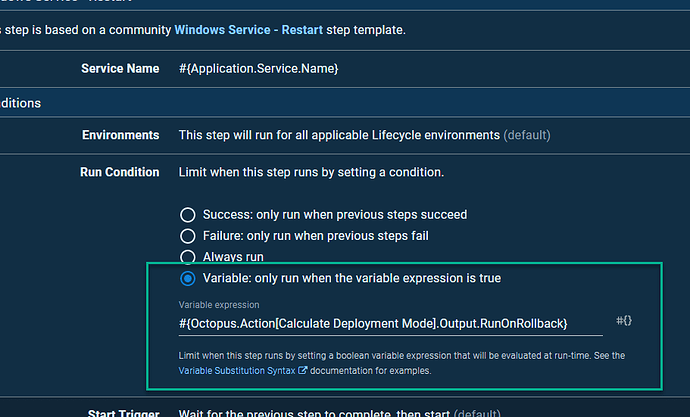 That will tell the step to only run when the integration tests fail.

Finally, here is a sample API script I’ve used in the past on a personal instance. It was for a simple project, it has no tenants, or prompted variables. I haven’t run it in a while, so you might have to fiddle with it a bit.

I hope that helps get you started!

Thanks a lot for your answer, Bob. Looks just like what i need